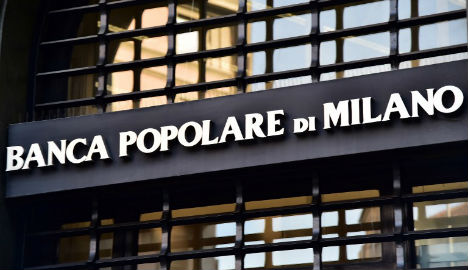 Banco Popolare di Milano. Giuseppe Cacace/AFP
As expected, the “yes” vote won easily at Banco Popolare, with some 23,683 votes in favour of the tie-up to 118 against.
Over at the Banca Popolare di Milano (BPM), the ballot had been expected to be tighter after two associations of shareholder retirees called on those voting to reject a deal they said would create a giant institution with little
clout.
But there too the “yes” vote won comfortably, with 7,315 shareholders supporting the merger while 2,731 voted against and 142 abstained. The new entity “Banco BPM” will be third only to Italian banking giants Intesa Sanpaolo and UniCredit. The merger will “strengthen the banking sector,” Milan Polytechnic expert Marco Giorgino told AFP.
It brings much-needed breathing room to Italy's troubled lenders, which hold 360 billion euros of bad loans — about a third of the eurozone's total — and have been hit by the market turmoil sparked by Brexit. The new bank will have 25,000 employees, some 2,400 branches, four million customers and be a leader in northern Italy, one of the richest areas in Europe, managing some 171 billion euros ($187.6 billion) in assets.
The unions, which had negotiated and won concessions on welfare and employee representation, supported the merger.
BPM's chief executive Giuseppe Castagna had told those gathered for the ballot that the merger was “a leap with which we ask you to look to the future and not the past, to look at a banking system with lots of problems which BPM can help”.
The bank had written to shareholders on Monday to urge them to turn out and cast their ballots at the extraordinary meeting on forging “Banco BPM”. The merger represents “the best option to lead together and avoid suffering later”, Castagna had said in the letter.
The deal has been on the books since March and got the green light from the European Central Bank, which required Banco Popolare to carry out a capital increase for 1.0 billion euros, which the bank duly did.
Banco Popolare's CEO Carlo Fratta Pasini told shareholders Saturday all the necessary conditions had been met “to overcome the regret over what is lost and left behind through a fusion which will be able to support our mission and identity”.
The tie-up is the first following a landmark reform of cooperative banks passed by Prime Minister Matteo Renzi's government in early 2015 in a bid to promote consolidation and efficiency.
The reform scrapped restrictions on ownership and voting rules giving shareholders one vote each regardless of their stake.