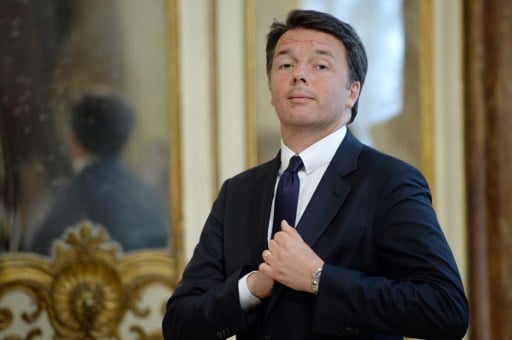 Matteo Renzi at a meeting on renewables in June. Photo: Filippo Monteforte/AFP
The cabinet signed off on the budget, which will then be scrutinised by Brussels. It remains to be seen whether the Commission will be satisfied with Italy lowering its deficit to 2.3 percent of gross domestic product from the
earlier 2.4 percent target.
“It's a budget full of good news for Italy and the Italians,” Renzi, who took power about two and a half years ago, told a press conference after the cabinet meeting.
“Italy is still not going well, but after two and a half years it's going a bit better. We are still not happy though, we are hungry for positive results,” he said.
Renzi was forced in September to slash Italy's growth forecasts for this year and next after a gloomy summer in which it became clear that an economy that had been slowly growing ground to a virtual standstill in the first half
of this year.
The prime minister said growth would be 1.0 percent in 2017, which is still more upbeat than the predictions of most analysts. The budget contains a series of growth-stimulating measures, including tax breaks for people renovating their homes or rebuilding houses destroyed by earthquakes.
It bumps the healthcare pot by 2.0 billion euros ($2.1 billion) to 113 billion euros and earmarks 1.9 billion for the creation of police jobs and making permanent those currently on temporary contracts in the force.
It sets aside seven billion euros for a three-year period to allow some workers to retire earlier. One billion euros will go to universities while 600 million has been set aside for families, including help with childcare.
Renzi said four billion euros worth of savings would be made by closing the country's loathed Equitalia tax agency and replacing it with a streamlined “mechanism” which would notify Italians of unpaid taxes and fines by text messages.
Another two billion euros would come from an “amnesty” to encourage citizens to transfer money in offshore tax havens back to Italy without suffering sanctions.
The 41-year-old Renzi has gambled his political future on a December 4 vote. Losing it could lead to fresh elections and a run-in with the populist Five Star Movement, expected to campaign by promising a Brexit-style referendum on whether Italy should quit the euro.

PARTNER CONTENT
European healthcare: how does your country rank?
Url copied to clipboard!