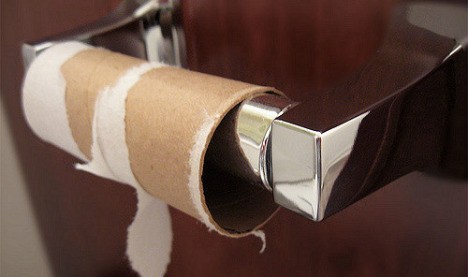 One British parent, whose child attends Scuola Primaria Casati, a state primary school in central Milan, shared the note he received with The Local.

It reads: “We've run out of toilet paper. So that this great friendship can continue [the note features images of a smiling poo and a toilet roll] we have to bring one packet of four rolls of toilet paper (each)!”

While the tone and illustration of the note clearly aimed at humour, the request highlighted the extent of the funding problems faced by schools across the country – and even in the centre of wealthy Milan.

“The school year has only just started, and we are informed that school funds are low and that parents should provide various things including paper, cups and even toilet paper!” the parent, William Hardy, told The Local.

“Very rarely is a light shone on these day-to-day problems,” he added. “All the parents agree with me that the situation is a 'vergogna' (disgrace), but are resigned to the situation and the school authorities are extremely reluctant to change the status quo.”

Hardy said that schools are not legally allowed to force parents to contribute, but that there was a “silent acceptance” among families. The note sent out to parents. Image: Private

He added that he had tried to look into the school's funding and find more details on how its money was spent, but his research proved fruitless.

“If the school authorities were more transparent, and provided detailed breakdowns of the costs involved in running a school, then at least parents would be better informed and could work better with the schools to rectify the problems,” said Hardy.

But it's not only in Milan that schools are struggling to provide the essentials.

A report published last week by Italian non-profit consumer organization Cittadinanzattiva revealed wide-scale problems in Italy's schools, including under-funding, poor hygiene and structural issues. Cittadinanzattiva looked at 150 schools in ten of the country's 20 regions for the Report on the Quality, Security and Accessibility of Schools.

It found that over a third (37 percent) of schools were lacking toilet paper, while 50 percent didn't have soap. More than two thirds (68 percent) meanwhile did not have a health and hygiene certificate.

These problems are replicated in neighbouring Spain. On Monday, The Local Spain reported that an under-funded school near Toledo in the centre of the country had asked parents to supply their own toilet paper.

Back in June, roughly a quarter of Italian schools failed hygiene tests with the problems flagged up by health authorities ranging from expired foods and dirty work surfaces to staff smoking in the kitchens.

As well as the concerns over insufficient hygiene in Italy's schools, an even more worrying issue is that of the schools' structural stability, a question thrust into the spotlight after the collapse of Amatrice's main school – which had supposedly been renovated to seismic standards – in the August 24th earthquake.

According to Cittadinanzattiva, one in ten schools have structural damage and two thirds don't have a structural certificate to confirm that they are 'fit for use'.

Since the start of the 2013/14 school year, there have been a total 112 collapses in Italy's schools, leaving 18 people injured, the report showed. In late September this year, two schools in Milan experienced roof collapses within a single week.

“Italian schools have certain weaknesses and problems to overcome. Among these is the issue of safety and adequate quality of the buildings and classrooms,” Italian president Sergio Mattarella said at the time.