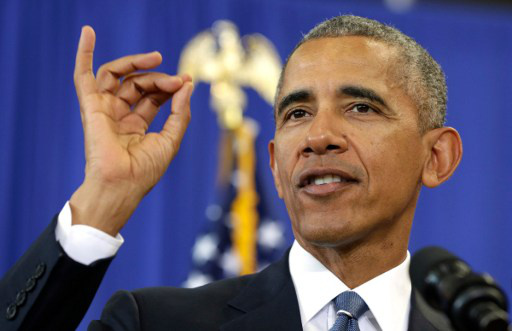 Renzi, the Italian prime minister and the most prominent critic of the European Union's emphasis on fiscal rigour over efforts to foster jobs and growth, is due at the White House on Tuesday for the final state dinner of the Obama administration.

And in an interview with Italian daily La Repubblica, the US president lavished praise on the “vision and ambitious reforms” of the centre-left Renzi, who has staked his political future on winning a December 4th referendum on constitutional reform.

Obama said Tuesday's dinner would be an opportunity to thank Renzi for “his strong partnership across a range of issues, including our shared commitment to broad and inclusive growth that creates jobs in both our countries and across Europe.”

Obama said the growth-boosting Recovery Act passed early in his administration had helped to create more than 15 million new jobs, cut unemployment in half and trigger a rise in wages and a fall in poverty rates.

“Some countries took a different approach,” he said. “As I've said before, I do believe that austerity measures have contributed to slower growth in Europe.

“In some countries, we've seen years of stagnation, which has fed into the economic frustrations and anxieties we see across the continent… “

Renzi has also blamed austerity for the rise in populist political parties across Europe, and repeatedly clashed with EU officials over demands for greater leeway on budget rules to allow him to pursue a more expansionary economic policy.

“Matteo has the right approach, and it's beginning to show results,” Obama said.

The US leader acknowledged that concerns over the uneven impact of globalization had helped fuel political  developments like Donald Trump's presidential bid and Britain's vote to leave the European Union.

He said the benefits of globalization had to be more broadly shared, but defended further liberalization of trade as a positive development, including a controversial new EU-US trade deal on which negotiations are currently stalled.

“In our global economy where so much of our prosperity depends on trade between our countries, it's simply not possible to withdraw and pull up the drawbridge,” Obama said.

“Protectionism only makes our economies weaker, hurting all of us, especially our workers.”

Obama said fears over the impact of the proposed Trans-Atlantic Trade and Investment Partnership (TTIP), were overstated.

“By eliminating tariffs and bridging differences in regulations, we'll make it easier to trade, especially for our small and medium-sized businesses. TTIP will not lower standards.