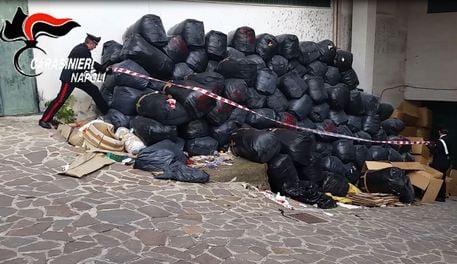 Some of the illegally dumped rubbish discovered by police. Photo: Carabinieri Napoli

The Land of Fires gets its name from the high number of fires that break out in the area due to uncontrolled dumping; in 2014, firefighters extinguished 2,531 across the area.

Over the past few years, government crackdowns have failed to stem the problem, with unauthorized rubbish dumps continuing to cause problems for local residents.

During the latest raid in the area between Naples and Caserta, police discovered that engine oil and dirty water from car washes and leather factories were being deposited directly into the local sewer system, producing dangerous fumes.

Over 3,000 used tyres had been dumped, as well as hundreds of bags containing scraps of fabric – with no sign of the forms legally required for disposing of waste.

In addition to the 69 people charged with environmental crime, activity was suspended in 34 businesses, Naples police said.

The local Camorra crime syndicate has been burning and secretly burying millions of tonnes of waste in the Campania countryside for decades but the extent of the problem has only been revealed in recent years – sparking furious protests.

It's not just flames that are the problem. Pollution caused by toxic waste dumping has also lead to levels of cancer in the area being way above the national average.

The Pascale National Tumour Institute says the number of tumours in women in the area has risen by 40 percent and those in men by 47 percent. Local cemeteries have sections for the growing number of child victims.

A health survey confirmed in January 2016 that there was a link between the dumps and the elevated cancer rates around Naples, particularly among children.

The European Court of Justice hit Italy with a €20 million fine last year for failing to resolve waste management problems in the southern Campania region.