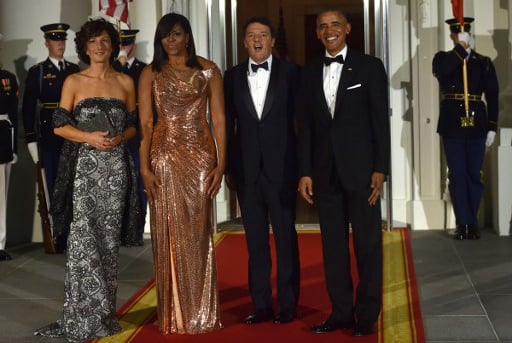 Matteo Renzi with his wife Agnese Landini and the Obamas on Tuesday. Photo: Nicholas Kamm/AFP

“Michelle, I know that your tomatoes are good,” Renzi said at the dinner. “But after hearing your speech allow me to be frank: Your speeches are better than your tomatoes.”

He was referring to Michelle Obama's recent speech in response to numerous accusations that Republican presidential candidate had groped and sexually assaulted several women.

In the moving speech, the First Lady said that she wanted girls to “understand that the measure of any society is how it treats its women and girls”.

“I can’t believe that I’m saying that a candidate for president of the United States has bragged about sexually assaulting women […] It has shaken me to my core,” she said.

At Tuesday's state dinner, which featured ravioli and gelato, Renzi commented that he had followed Obama's career closely and was a “big fan”.

But he said that when he heard Michelle's speech, “I thought 'Finally, there is someone who is on the same level as Barack. It's Michelle Obama.”

The Italian premier also invited the family to visit his hometown, Florence, in the future. He suggested that they could see Michelangelo's statue of David, sample Tuscan wine and determine once and for all who grew the best tomatoes.

Obama also offered plenty of praise to Renzi, having said on Tuesday morning that he had “saved the best until last” in inviting Renzi to his final state dinner.

He noted that Renzi had been Italy's youngest ever prime minister when he took office aged 39.

The outgoing US president slipped plenty of Italian cultural references into his speech. After reminiscing about a family holiday to Rome, he quipped that the US elections can “seem like Dante's Inferno”, referring to the epic poem in which the narrator descends into the seven circles of hell.

He also praised Renzi's proposed constitutional reforms, which have been hailed as the most important in Italy since World War II and will be the subject of an upcoming referendum

“We believe that it will help accelerate Italy's path towards a more vibrant, dynamic economy, as well as a more responsive political system,” the US president said.