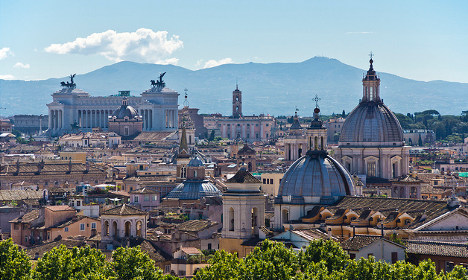 Italy's capital, Rome, has plenty of jaw-dropping sights... but which Italian landmark is the best in Europe? Photo: Bert Kauffmann/AFP

The Renaissance church is found in Vatican City at the heart of Rome. One of the largest churches in the world, it was designed by a group of prominent architects including Michelangelo.

The basilica is thought to be the burial site of St Peter, the very first pope, and is popular with Catholic pilgrims and tourists alike.

One reviewer, from Florida, said: “This is a must see place. It's an incredible part of history, art, culture and for your inner peace.”

Another called their visit “a dream come true”.

In the list of Europe's top 25 landmarks, a further two were located in the bel paese.

Milan's Cathedral took fifth place – beating the Eiffel Tower which only managed eighth on the list – and the Pantheon in Rome was ranked 13th.

Both the Milan Duomo and St Peter's had risen in the rankings since last year, when they were voted fourth and seventh best respectively.

When it came to the world rankings however, St Peter's slipped to fourth place, outdone by Machu Picchu in Peru, the Sheikh Zayed Mosque in the UAE, and Angkor Wat in Cambodia.

The Italian capital was also listed as the seventh favourite destination in the world.

The ranking is based on the millions of reviews posted by travellers on the TripAdvisor website over a 12-month period.