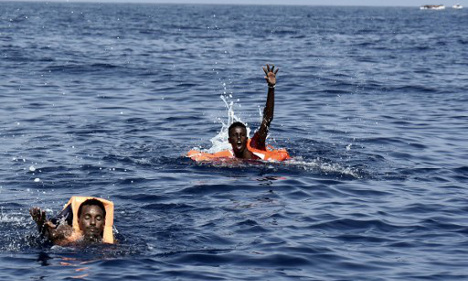 Attempts at the dangerous crossing are continuing despite worsening weather as winter approaches, with more than 2,400 migrants rescued off Libya in total since Sunday.

The medical charity Medecins Sans Frontieres tweeted that it had rescued 802 people on six rubber dinghies and one small wooden boat, and MOAS, a Maltese NGO, said it had rescued 432 migrants on three dinghies.

Italian coastguards and the crew of an EU counter-trafficking vessel rescued the remaining migrants.

Boats carrying migrants are treacherous even if they don't sink: exhaust fumes, hypothermia, dehydration and overcrowding have all proved fatal.

On Wednesday, rescuers found five bodies on a dinghy carrying around 200 people, many of them unaccompanied minors.

The Italian interior ministry said Tuesday that more than 145,000 migrants had landed in Italy so far this year, a figure similar to that of the previous two years.

According to the UN, at least 3,654 people have died trying to cross the Mediterranean this year.

Meanwhile, it emerged Thursday that as many as 900 migrants may have died in the 2015 sinking off Libya of an overcrowded fishing trawler, about 100 more than previously thought.

The new toll from the worst maritime tragedy in the Mediterranean since World War II came after forensic scientists, who spent three months examining 675 body bags, discovered that many contained the remains of more than one person, Italy's missing person chief Vittorio Piscitelli told a news conference in Rome.