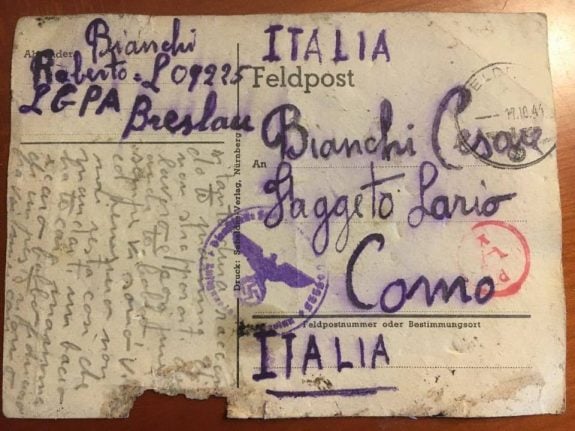 'It's not every day that you come across a postcard from 1944.' Photo: Valentina Romano/The Local

“I don't know if it's a case of 'being in the right place at the right time',” teacher Valentina Romano told The Local. “But it was very emotional to find the postcard. When I saw the stamp with the Nazi eagle, I got goosebumps.”

Walking home from school last week, she spotted the postcard lying on the pavement, and immediately noticed the wartime postmark.

Dated October 17th, 1944, the postcard was signed by a Roberto Bianchi, writing from Wroclaw – a part of Poland which was at the time occupied by Nazi Germany. He reassured his parents that he was doing well, but wouldn't be able to spend Christmas in Faggeto Lario, the small town in Como where his family lived.

“My dear parents, after a long silence, this is me letting you know that I'm now at another site where I work on the land,” Bianchi wrote.

“I'm in the open countryside, in a farmhouse. I've got plenty to eat, so don't worry at all – I'm very well,” he says, adding that it won't be possible to return home over Christmas. He signs off with the words: “I'm always close to you in thought. There's nothing left for me to do than send you a kiss, dear mum and dad, I trust that I will soon return to you.” Romano at first thought the card might have fallen out of one of her students' bags, since they often brought books to school which they had inherited from their grandparents. But when none of them laid claim to the long-lost post, she was determined to track down its owner herself.

“When I got home, I decided to write on Facebook what had happened to me – because it's not every day that you find a postcard from 1944 on the pavement,” said the teacher.

“I wrote out the contents and photographed the postcard, and asked my journalist friends to help me track down the owners of the postcard.”

One friend, who worked for the local TV channel, asked Romano to come into the studio to make an appeal in order to locate relatives of the postcard's sender, while dozens of people shared the Facebook post. A few days later, the family of the recipient of the card got in touch with the TV channel, who in turn contacted Romano, allowing her to deliver the postcard to Roberto's 74-year-old cousin.

“It was emotional returning the card to Roberto's family, who were grateful, happy and moved. Above all, I was happy to learn that Roberto returned home and lived a long life,” Romano said.

She learned that as a 20-year-old soldier, he had been taken as a prisoner of war by Nazi forces and subjected to forced labour.

There were also two surprising coincidences.

“I discovered that he worked as a postman. This is crazy: he was a postman, and I found one of his letters and returned it to his relatives,” said Romano. “Another coincidence: my surname is Romano, which is also the first name of Robert's cousin who I gave the postcard to.”

It's unclear how the postcard ended up on the pavement, but the woman who lives in Roberto's old house had recently had a clear-out, so it's likely that the postcard had ended up in a pile of paperwork which got thrown out, and then somehow fell from a rubbish truck onto the street where it caught Romano's eye.

“I don't know how to interpret the whole thing and I don't know why it's happened to me – I've never found so much as a cent on the pavement before! – but it's certainly a story which has an air of poetry and of opportunity,” Romano said. “Another opportunity to remember a past which seems long ago, but in reality isn't. And an opportunity not to forget what happened.”

Remarkably, Roberto's is the second letter from an Italian prisoner of war to turn up in Italy this year.

In February, a researcher found a letter from a military officer in post office archives. Though it had arrived in Treviso in 1944, it had been lost in the chaos of the war, but the researcher was able to track down the sender's younger brother and pass on the note.