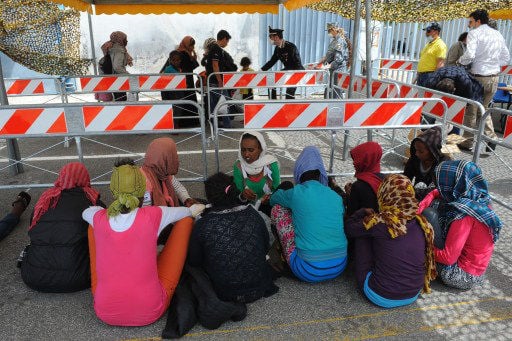 File photo of newly-arrived migrants in Italy, rescued at sea in a Frontex-coordinated operation. Photo: AFP

The European Border and Coast Guard Agency, as Frontex is now called, has already helped return some 7,800 economic migrants this year, and expects the number to rise.

Fabrice Leggeri told journalists in Rome some member states were having difficulties signing repatriation agreements with departure or transit countries due to political complications, but Frontex could usefully apply pressure on their behalf.

“If third countries say no to Frontex on repatriation, they say no to the EU as a whole. That's a big political statement,” he said.

The agency already has return policies in place largely with the Western Balkans, as well as countries from Pakistan to Nigeria.

The EU signed a “Joint Way Forward” repatriation agreement with Afghanistan this month – among protests from some human rights organizations – and Italy began returning migrants to Sudan in August, again sparking consternation in some quarters.

Ethiopia, Mali, Niger, Nigeria and Senegal “have been identified as priority countries for the (migration) compact” which combines “foreign policy, political engagement with third countries” and repatriation agreements.

Leggeri admitted that “at the EU level there is a relatively low rate of return.” Only around 40 percent of the return decisions are “effectively implemented,” he said.

But, he added, the agency was working to help each country improve the process.

For the repatriation to take place, all those refused the right to remain must have identity documents to travel or have their nationality confirmed by consulates and travel documents issued.

Leggeri said consular officials would be invited to meet migrants in reception centres to issue documents in order to save time.

Italy has seen nearly 157,000 people arrive on its shores this year, with nearly 328,000 people crossing the Mediterranean in total.

The majority of those who washed up on Greece earlier this year were Syrians followed by Afghans. In Italy, however, the largest group comes from Nigeria, followed by Eritrea, Sudan and Gambia.