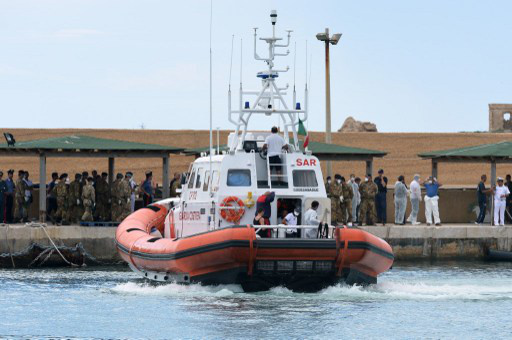 The Italian navy confirmed the probe, led by Rome prosecutors, to AFP on Tuesday but refused to comment further.

Those under investigation include Catia Pellegrino, the first woman to command an Italian navy vessel, who was awarded the Order of Merit for her work saving migrants at sea, according to media reports.

The probe centres on the sinking of a migrant boat between Malta and the Italian island of Lampedusa in October 2013, when 26 bodies were pulled from the water and more than 240 were missing.

A Syrian doctor on board used a satellite phone to tell the Italian coastguard several times that the boat was taking on water, but help did not arrive until after it had capsized several hours later.

The Italian navy vessels Libra and Chimera were in the vicinity but did not intervene initially, apparently waiting for instructions from the Maltese coastguard.

The head of the defence committee of the Italian Senate, Nicola Latorre, commenting in the Messagero newspaper, said Pellegrino and the other officers being probed “are not just innocent, they are heroes!”

“Checking to see if there were problems of coordination is one thing, but anslaughter and failing to help someone in danger – there is no grounds for this,” he said.

READ MORE: Immigrants at sea – why Italy must do more