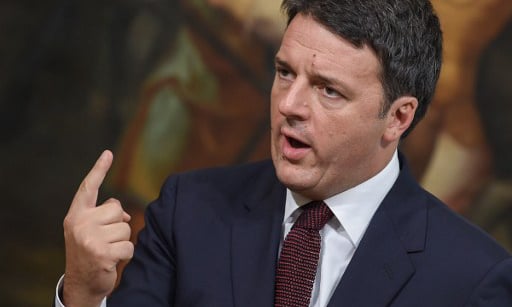 “We give 20 billion (euros) to Europe so that we can get back 12 – and if Hungary, the Czech Republic and Slovakia want to preach at us about immigrants, allow Italy to say that the system is no longer working,” Renzi told RAI 1 television.

Asked if he was ready to use Italy's veto to torpedo the EU's budget, he said: “Yes, absolutely.”

Renzi railed against central European countries that have closed off their borders to migrants and refused to take in asylum seekers under an EU quota plan as Europe battles its worst migration crisis since World War II.

“If you build walls against immigrants, you can forget about seeing Italian money. If the immigrants don't go there, the money won't go there either,” he said.

Italy has a forecast budget deficit of 2.3 percent of GDP in 2017 – significantly higher than that expected by Brussels – due to a deadly earthquake in August as well as the costs of hosting migrants arriving across the Mediterranean from North Africa.

“The clarifications demanded are linked to exceptional expenditure for the earthquake and over immigration,” Padoan said.

Italy has seen 155,000 people arrive on its shores this year, putting immense strain on its overcrowded reception centres as well government coffers.

On Tuesday the Italian coastguard, which coordinates rescue operations off the Libyan coast, said 500 people had been rescued from four inflatable boats during the day.

Thirteen dead bodies were recovered by two of the rescue boats – 11 by a ship run by the charity Doctors Without Borders (MSF), and the others by a Maltese patrol vessel.

In northern Italy, residents of the village of Gorino in Ferrara meanwhile barricaded roads with pallets to block the arrival of a bus carrying 12 migrants, all African women, who were due to take up residence in a requisitioned hostel.

Local authorities eventually gave up and took the women to neighbouring villages.

The incident sparked a mixture of criticism and praise in Italy, where anti-migrant sentiment has been rising in some corners, as in other European countries.

Local politician Alan Fabbri of the anti-immigration Northern League thanked those who had protested for “democracy and good sense”, while Interior Minister Angelino Alfano said the barricades “did our country no honour”.