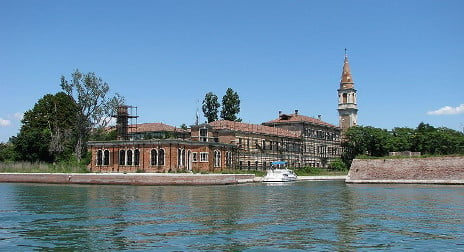 The abandoned hospital on the island of Poveglia, the most haunted place in Italy. Photo: Jean-Pierre Dalbéra/Flickr

The country might be best known for its pleasant weather and beautiful monuments, but it has a dark side.

Each of the following places has a dark past – a past they might not be able to escape.

Tales of tortured hospital patients crying out in pain from beyond the grave, of mysterious disappearances and grisly murders, have all been passed down through the generations, along with reports of inexplicable sightings and ghostly wails…

Read on to find out which are the five most haunted sites in Italy – and how they came to be that way.

Located between Venice and Lido in the Venetian Lagoon lies Poveglia, considered the most haunted place in Italy.

In the 18th century the island was used as a quarantine station for people with infectious diseases. According to local legend, half of the island’s soil is now made up of the remains of plague victims who died there.

Later on, between 1922 and 1968 the island was also home to a hospital for the elderly and mentally ill. The hospital director was notoriously cruel and was rumoured to have performed horrific experiments on the patients, including crude lobotomies.

He is said to have performed them with tools such as hand drills, chisels and hammers, killing patients in the process.

The locals believe the island to be cursed by the tortured souls who once lived there, while the hospital director is said to have killed himself after being driven mad by the ghosts of his victims.

In 2014, a brave Italian businessman, Luigi Brugnaro, purchased the island with plans to redevelop it.

Situated in a beautiful park in the Veneto town of Cona, Villa Magnoni is a mysterious derelict house, nearly entirely boarded up.

A group of friends reportedly visited the house in the 1980s and heard children singing in the garden. Upon exploration, they found nothing. But they are said to have seen a woman in the top window of the house, shouting at them to leave. The friends ran in fear and sped away in their car, which was then involved in a tragic accident in which three of them were killed.

The one survivor reportedly went back to the house to investigate the woman they had seen, and upon searching the house discovered that the window from which she appeared was in a room which had no floor. There have been several reports of a female voice coming from the house, which remains uninhabited today. Castello di Montebello, a 14th century hilltop fortress near Rimini, was home to a little girl called Guendolina. She was albino, which in those days was thought to be a curse, and anyone with albinism was burned at the stake.

To protect their daughter, her father would not allow her to leave the house, and hired two guards to watch over her. But legend has it that on 21st June 1375, the day of the summer solstice, the little girl was playing with a ball when it fell down the basement stairs. She ran after it and disappeared. Some suspected that her father killed her, but a body was never found.

Her ghost is said to inhabit the castle, and every summer solstice people report hearing the cries of a little girl.

Voltri is a small hamlet containing one of the country’s most haunted houses.

A family, all of whom suffered from mental disorders, are said to have once owned the house and ran an inn from it.

Legend has it that they would invite passing guests to stay and then during the night, murder them and steal whatever money they had before throw the corpses into a mass grave. The souls of the victims are said to have been bound to the house and roam around it during the night, making strange noises.

The house was empty for many years before a family moved in after the Second World War. They are said to have witnessed more than one strange event.

According to locals, several people have also witnessed a young girl dressed in white, asking if anyone has seen her lover. The girl is believed to have been betrothed to one of the family’s victims and after he never returned to her, she went to look for him. Now she wanders around the house, looking for her lost love.

Botanical Gardens, Lucca: Where a young girl made a deal with the devil Situated within a corner of Lucca’s city wall, the botanical gardens are home to an old legend.

A noblewoman named Lucida Mansi lived in Lucca in the 17th century. She is said to have been extremely vain, so much so that sold her soul to the devil in exchange for retaining her beauty.

The pond in the centre of the gardens encircles the so-called “plant of death” as it lies on the burial site of plague victims, non-believers and executed prisoners. In its dark waters, you can apparently see the face of Lucida. She is said to have had many lovers, but wishing to keep her reputation intact, she murdered them to avoid scandal and did so by throwing them into a ditch covered in sharp blades.

She died of the plague but, still unhappy in death and having sold her soul, legend says that on dark stormy nights a fiery coach with Lucida inside can be seen racing around the pond, haunting the gardens.