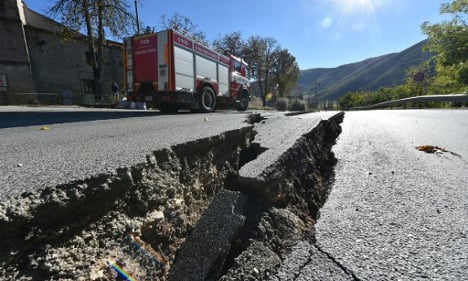 Cracks in the road outside Norcia. Photo: Alberto Pizzoli/AFP

The biggest displacement was in the Castelluccio region, near the small town of Norcia, which lay only six kilometres (3.7 miles) from the epicentre, it said. The ground in this region was pushed up or sank by up to 70cm.

The quake, measuring a powerful 6.5-magnitude according to Italian monitors, struck at a very shallow depth. It was the latest in a string of seismic shocks to hit central Italy this year.

The event was followed by around 1,100 after-shocks, including 19 quakes registering between four and five magnitude and 240 of between three and four magnitude, the National Institute of Geophysics and Volcanology said.

The strongest was 4.8, occurring on Tuesday shortly before 0800 GMT.