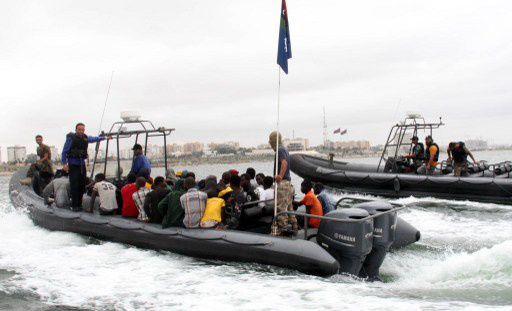 Migrants sit on a Libyan coastguard boat taking them ashore after they were rescued. Photo: AFP

Italian Rear Admiral Enrico Credendino, who heads up Operation Sophia, admitted NGOs working to save migrants off Libya had been shot at by the coast guard in the past, but said the training programme, which began last week, was the solution.

“In some occasions the coast guard has reacted too violently (to NGO boats entering Libyan territorial waters) because it did not have the training,” he told journalists in Rome. “That's what the training is for”.

The mission, which aims to train 500 Libyans in total, also hopes to stop tragedies such as the one last month in which men on what appeared to be a Libyan coast guard speedboat attacked migrants on a dinghy, leaving 25 people feared drowned.

“In some cases we cannot be sure that it's the coast guard… it's the traffickers who are masquerading,” Credendino said.

“Everyone wears camouflage (uniforms). We've seen Zodiacs (rigid inflatable boats exactly like the ones used by the coast guard) sailing under a Libyan flag. It doesn't mean it's the coast guard,” he said.

“In any case, the idea of training the Libyan coast guard is to make sure they act in accordance with international law,” he added.

By providing training and equipment – Italy is supplying ten coast guard boats – it will then be up to the Libyans to deal with the security issues off its coastline, including the smuggling of migrants, weapons, drugs and oil, he said.

With October marking a record monthly high in the number of migrants arriving in Italy in recent years – some 27,000 people – the pressure is on to train the coast guard quickly in order to curb the growing influx from North Africa.

And with Mediterranean migrant fatalities this year hitting 3,800, it is also hoped lives will be saved.

“Most of the people who have died this year have died inside Libyan waters, where we cannot intervene. A trained Libyan coast guard could prevent many deaths. This is why we're in a rush to train them,” Credendino said.

With Libyans also expected to attend training camps on land in Italy, Greece or Malta, the EU wants the coast guard “to be able to independently patrol the territorial waters by summer, before the (migrant departure) season begins”.

Asked whether those rescued by the newly trained force will be returned to chaotic Libya – where many migrants say they have been tortured – Credendino said “we'll have to see what happens. That's a political decision”.

“We have to work together with the International Organisation for Migration (IOM) and the UN's refugee agency,” both of which have agreed to help with the humanitarian repatriation of vulnerable migrants from Libya.

The EU launched Operation Sophia last year after hundreds of migrants died when their rickety boats sank off southern Italy.

It currently comprises five vessels and three helicopters charged with intercepting smugglers' boats and destroying them, in international waters.

The Sophia vessels, which patrol up to 12 nautical miles off the Libyan coast, have so far destroyed 337 dinghies and wooden boats to stop smugglers re-using them, and handed 99 alleged traffickers to Italian police.