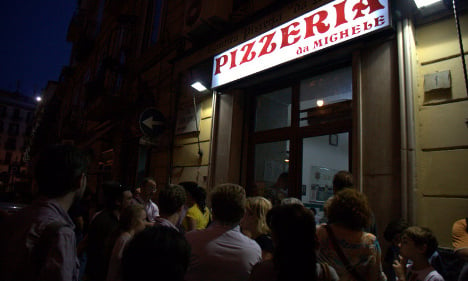 The Da Michele restaurant is renowned as the best in Naples, the pizza capital of Italy, and on an average night hungry visitors will queue patiently for hours to get a seat.

But foodies based in Rome no longer have to make the pilgrimage to the Campanian city to get their fill of world-class pizza. Mark your calendar for November 20th, because that's the date that the Roman branch of l'Antica Pizzeria Da Michele will open.

This is the first time in the family-run restaurant's 140-year history that another Italian branch has opened.

READ ALSO: Italy's best pizza is made in a rehab centre

In fact, the announcement has come as a surprise in foodie circles, since the restaurant had already announced plans for a London branch, set to open later in November, but there was no word of expanding within Italy until this week.

Rome's Da Michele will be located on Via Flaminia 80 – just a short walk from the central Piazza del Popolo.

A team of four expert pizza chefs will create masterpieces available in two classic flavours: margherita and marinara, just like in the original shop. There will be seating room for 120 people, plus a garden and parking spaces.