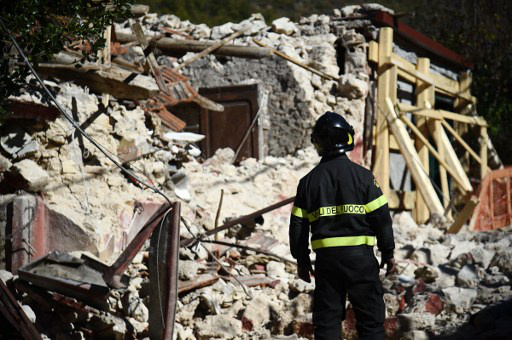 Just one of the houses destroyed in the quake. Photo: Filippo Monteforte/AFP

Farmers' organization Coldiretti warned that tourism, a key sector in the rugged mountain areas, is facing collapse as nature and food-loving visitors are put off by the scenes of devastation broadcast around the world.

Coldiretti said tourists would normally spend a total of 220,000 nights a year in the quake zone, providing a financial lifeline for scores of farm B and B's, hotels and restaurants, as well as a key market for local artisanal food producers.

“The risk is that this will be wiped out completely by the earthquakes,” the organization said, citing a survey of operators which found “tourists fleeing, reservations being cancelled, occupancy rates at virtually zero and disastrous expectations for the Christmas holiday period”.

“If we are to avoid the area being permanently abandoned there has to be support for reconstruction and for people to resume their occupations,” Coldiretti said. “A lot of farms are in danger of being forced to close.”

The government has vowed to rebuild all the damaged buildings and has announced plans to use converted shipping containers as temporary accommodation while reconstruction is completed.

More than 40,000 people are estimated to have been forced out of their homes as a result of the damage done by the August 24th, October 26th and October 30th quakes, and by thousands of powerful aftershocks, the latest of which was a 4.8 magnitude tremor which struck in the early hours of Thursday.

Of the total, 26,000 are being put up in public buildings, hotels and tents, the national civil protection agency said. Around 17,000 of them have opted to stay close to their homes and dozens are still sleeping in their cars. The government has pledged the containers will be in place by Christmas.