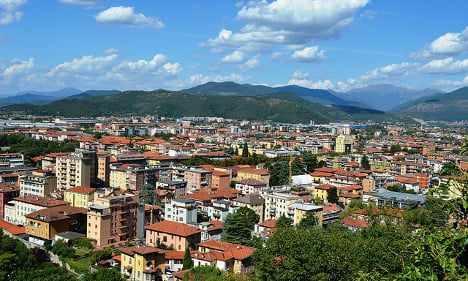 The northern city of Brescia has been at the centre of several anti-terror sweeps. Photo: Pedro/Flickr

The man, named as Kosovan national Gaffur Dibrani, was arrested by Italy's anti-terror squad, Digos, for defending terrorist acts and incitement to terrorism.

Brescia police said that the 24-year-old, who lived in the small town Fiesse, had published photographs of his two-year-old son online with symbols of the Isis terror group and references to the pair carrying out future terrorist acts. One such picture was accompanied by the phrase: “You'll be the new lion.”

His arrest came as part of an ongoing operation dubbed 'Tut Elimi' by police, from the Turkish for 'take my hand', which was the title of a song posted online by Dibrani, extollling the virtues of terrorism.

The song included the line: “Take my hand and we'll go to jihad, we'll dye the land with our blood, we'll sacrifice our souls.”

Police said in a statement that the video “clearly shows the process of Dibrani's radicalization”. Police commissioner Vincenzo Ciarambino said the man had drastically changed his lifestyle over recent months, frequently posting social media statuses about Islam and terrorism.

In other videos and social media posts, Dibrani praised and expressed solidarity with members of terror group Isis.

He is being held in custody in Brescia's Canton Mombello prison awaiting questioning.

The northern city has been at a the centre of several anti-terror sweeps in recent years, including one last year conducted in cooperation with Kosovan authorities which led to four arrests.

The mayor of Fiesse, Chiara Pillitteri, told Il Giornale di Brescia: “We are very worried, the community has been greatly affected by the arrest.” She added that the man had been living in council accommodation, but had never caused problems.