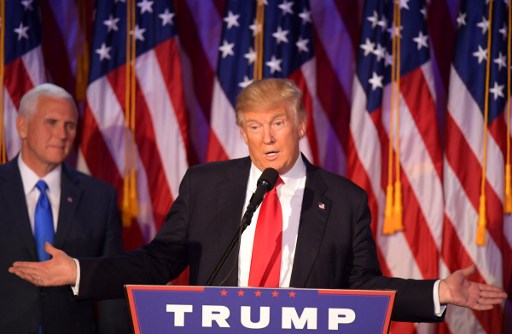 The US Embassy in Rome told The Local that Americans living in Italy “should not be concerned about any immediate changes resulting from the election.”

However, the new administration is going to lead to changes which will have an impact far beyond the US. From politics to trade to security, here are the five ways Trump's presidency is likely to affect Italy.

1. A boost for the far-right

Shortly after the result of the US election became clear, the leader of Italy's far-right Northern League, Matteo Salvini, posted a series of jubilant Tweets, one with the hashtag '#godonaldgo'. Salvini said he was “very pleased” at Trump's win, and later posted: “Americans, thank you, thank you and thank you!”

Lars Rensmann, a professor of European politics and member of the Editorial Board of the Journal of International Political Theory, told The Local that although the majority of Italians are anti-Trump*, “Salvini is celebrating for a reason.

“The same xenophobia that got Trump into the White House goes to the heart of the radical right in Italy as well, so this is a huge boost to Salvini,” Rensmann added.

The politics expert described the encouragement for the far-right as the “most significant immediate consequence” of the election on Italian politics, and said that we are likely to see right-wing parties exploiting friction between multicultural, cosmopolitan Italians and those who feel they have lost out from globalization.

Italy's next general election is unlikely to be held long before spring 2018, but while the idea of Salvini himself coming to power seems very distant for now, a fortified far-right can have other significant effects.

“The fact that Trump is in power and the Northern League has been encouraged, this will slow down any positive immigration reform in Italy, which in comparison to the US and other European countries, doesn't really have a comprehensive immigration policy,” Rensmann explained.

2. Renewed activism among the left A demonstrator carries an umbrella reading 'Respect and Freedom' at a Rome women's rights rally in November. Photo: Filippo Monteforte/AFP

Seeing the triumph of a man who has urged, among other things, to build a wall on the Mexican border, create a registry of Muslims in the country, and cut funding for victims of domestic abuse and sexual assault will likely have a sobering effect on people on the political left all over the world.

On Saturday, the day after Trump's inauguration, Women's Marches have been planned in both Rome and Milan as part of a global movement in solidarity with the Women's March on Washington in America.

“Trump's election is activating the liberal base” in Italy as well as the US, one of the events' organizers, Elizabeth Farren, told The Local. “Liberals now realize that many of the rights they've taken for granted for decades may be under threat.”

She added that the effect of Trump's victory was being felt in Italy, because “Italy is in no way immune to the populist wave that elected Trump”.

What's more, Farren commented on the strong ties between Italy and the US, both cultural and economic, and expressed concern that some of Trump's proposed policies could have a negative influence overseas. “If the US decides that women's rights are no longer important, that immigrants should be expelled, that walls should be built and so on, why should Italy be immune to such influence?”

READ MORE: Why women will march in Rome on Saturday

3. In the long-term, a new approach to politics It's more than just a boost for one side of the political spectrum and a warning for another: the election of Donald Trump also signals a wider change in how politics is done. Not only might other international candidates be tempted to run their campaigns on similar tones, but voters might feel legitimized to support policies formerly viewed as too extreme.

This result may also reinforce what Italian journalist Leonardo Campus terms “the dangerous illusion that everybody can do politics”, even at the very top level, without requirements of experience or specific competence. He argues that we are likely to see more 'outsiders' with good communication skills and financial resources, but little preparation for the job, entering the political arena.

Campus says: “As has been noted, we've sen this kind of politics before, in Italy with Berlusconi. [Italian novelist, philosopher and professor] Umberto Eco said that Berlusconi was not an Italian issue, it's a problem with democracy in general.

“This is food for thought for political scientists and people in general. America should have learned from our misadventure with Berlusconi – the idea that because he was a businessman and not a politician, he could bring the country success during a difficult economic period, proved to be inaccurate.

“So one thing this shows is that we must refrain from saying this is an 'American' problem, just like it was wrong to view Berlusconi as an Italian problem.” Instead, Campus argues, there is a problem with western democracy in general. Many average voters, for very good reasons, feel uncertain and have lost hope in the possibility of long-term political visions to address the complex problems of today’s world. So they go for short-term 'solutions', and for characters with big egos.

So how can Italians deal with this? According to Campus, the solution is in education and awareness; avoiding treating characters like Trump as a joke, and those like Clinton as a shoe-in.

“We all need to make an effort. It’s not just about the government giving funds to culture and research, although this is essential. It’s also about promoting reading and reflection over slogans, giving public recognition for those who qualified themselves and worked seriously,” he says.

“On the other hand, voting is not only our right but also our responsibility. So we should all getting back to good old habits, such as reading newspapers daily, accepting the complexity of issues, discussing politics with friends of different opinions. This may enrich our views, give us empathy and doubts over prejudices. Big characters like Trump try to simplify things and that appeals to ordinary, uniformed voters, but it doesn't provide real solutions to real problems. To counter this trend, we need more culture and involvement – that’s the anti-venom.”

4. Worries over trade and security Renzi with fellow NATO members, including Barack Obama, at a summit in Poland. Photo: Mandel Ngan/AFP

It is too early to make predictions about the new administration's attitude to global trade and repercussions on the global economy – not least because Trump has been extremely vague on where he stands on these issues – but there are fears that he won't be as open to international trade agreements as his predecessor, particularly when it comes to Europe.

“I wouldn't be surprised if there were repercussions on Europe, where most did not want a Trump victory,” says Campus.

Rensmann underlined fears that Trump would slow down global trade, saying: “We don't know how many of his anti-trade policies he'll actually put into action. I don't expect him to abandon existing trade agreements, but certainly future ones are highly unlikely and he may push for adjustments to what exists.”

As for security, Trump criticized NATO throughout his campaign, arguing that other countries in the alliance weren't pulling their weight. Eugenio Lilli, a lecturer in US Foreign Policy at Rome's John Cabot University, told The Local: Perhaps something may change in the security relationship between the two countries given Trump's statements concerning NATO and the EU.

“In fact, Trump has questioned America’s alliances and commitments, and argued that US 'protection' should be in exchange for payment. However, I am not sure how and if these statements will actually result in a significant change of policies.” Again, Trump has not been clear about his planned foreign policy, so it's hard to say what kind of relationship Italy will have with the US under the Trump administration – but given that former PM Matteo Renzi was a vocal supporter of Democrat Hillary Clinton throughout the election campaign, it could be off to a somewhat rocky start.

“We see that Trump has a narcissistic personality and dismisses anyone who doesn't support him. Renzi supported the Democrats, and Trump never seems to forget those who criticize him,” Rensmann notes. “Then again, who wasn't supporting Clinton? Trump knows he didn't have any support in Europe, so it won't be any different from the rest of the continent.”

The politics professor adds: “Trump doesn't know much about the world and is largely uninformed and uninterested in foreign countries and their constitutions, which has the potential to create problems. The best hope is that much of this will be delegated to others.”

It seems that we can expect a complicated relationship between Trump and Europe, since Trump has been highly critical of Europe and the EU, supporting the UK's exit from the Union.

In terms of actual policy, Rensmann says: “Trump has shown support for more isolationist policies. If he governs as he said he would, foreign policy will be treated as a business matter.”

Additionally, there is the issue of how the Vatican will deal with President Trump and vice versa. During the election campaign, the Pope said that Trump was “not a true Christian” after his comments about building a wall and keeping immigrants out of the US – a claim Trump termed “disgraceful.

“The Pope and Trump represent very different worldviews, so it won't be easy to get a good relationship,” Campus says.

*According to opinion polls leading up to the election, just 11 percent of Italians said they would vote for Donald Trump if they were in America.

Leonardo Campus is a historian, journalist and author of two history books, including Six Days that Shook the World, which is about the Cuban Missile Crisis.
Lars Rensmann is a professor of European politics and member of the Editorial Board of the Journal of International Political Theory.