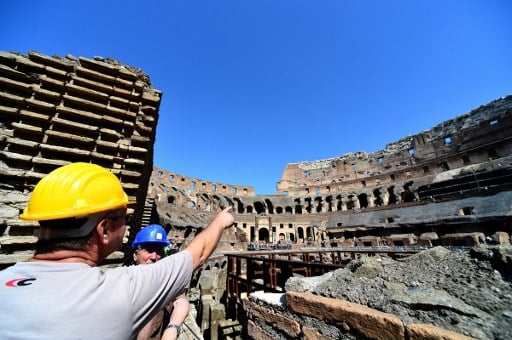 The 2,000-year-old, partly-ruined structure was allocated four million euros in 2014 to carry out reinforcements deemed necessary to offset the impact of tunneling for a new underground train line which will pass close by.

But the money was never released and guardians of the city's architectural heritage now fear it never will be after new mayor Virginia Raggi announced she plans to dissolve the underground company, Roma Metropolitana.

“By liquidating Roma Metropolitana, the mayor has left us without anyone to deal with regarding the financing needed for the urgent strengthening of the Colosseum,” a spokesman for the superintendent of the city's archaelogical treasures told AFP.

The superintendent himself, Francesco Prosperetti, has warned that he will seek to block any further work on the still-unfinished metro extension if the funds are not released.

“The Colosseum cannot wait any longer,” Prosperetti told Italian media. “As a citizen I would not like to delay the metro but as the defender of this monument I may not have any choice.”

Raggi has said work on the metro project will continue with new management progressively replacing Roma Metropolitana, an organization she has accused of overseeing the “shameful squandering of public funds.”

The new line is supposed to run from the city centre to the eastern suburbs. Most of it opened last year but the final section, which will bring it into the Colosseum area and connect with the capital's two other metro lines, remains unfinished.

Started in 2007 with a budget of 2.2 billion euros ($2.4 billion), the work is now forecast to cost at least 3.7 billion and Raggi has put plans for a northern extension of the line on indefinite hold.

Earthquakes in central Italy on August 24th, October 26th and October 30th were powerful enough in Rome to result in a number of new cracks appearing in the Colosseum's exterior walls.

But Italy's top tourist attraction has remained open to the public.

The landmark site has survived dozens of earthquakes over the centuries although it was a tremor that led to the collapse of its southern wall in 1703.

Prosperetti said work was most urgently required on interior walls in the top section of the structure, which is not open to the public.

The exterior of the Colosseum has recently been given a facelift thanks to a three-year clean-up financed by the upmarket fashion and footwear company Tod's.