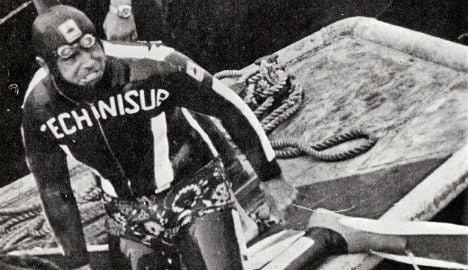 Enzo Maiorca in one of the first wetsuits designed especially for him. Photo: Wikipedia
Maiorca, who was 85, was the first man to dive to a depth of 50 metres and eventually set a personal best of 101 metres in 1988 at the age of 57. He was born in 1931 in Syracuse, Sicily, where he also died. Mayol died in
2001.
French actor Jean Reno played Maiorca in “The Big Blue”, which also starred Rosanna Arquette as the love interest and Jean-Marc Barr as Mayol.
Having been a keen spearfisher in his younger days — something he gave up in 1967 after a “titanic struggle” with a “combative grouper” — he dedicated himself to defending the marine environment during his later years.