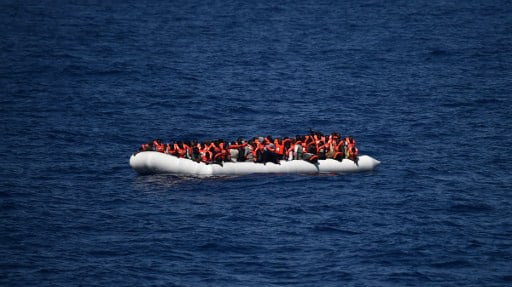 German NGO Jugend Rettet, whose boat was at the scene, said 23 survivors had been rescued by an oil tanker which was first to reach the stricken boat.

“The crews are searching for survivors in the water and recovering dead bodies,” it added in a tweet.

The survivors and four recovered corpses were transferred from the tanker to the Acquarius, a boat operated by another charity group, SOS Mediterranee.

A survivor told one of that organization's staff that the dinghy had begun to sink at 6.00 am, four hours before the tanker arrived.

“We were 122 on the boat, no children under 15, but there were ten women travelling with us and only one survived,” the survivor was quoted as saying.

“We waited in the water, taking any floating thing to remain afloat, but most of the people drowned, including my little brother. He was 15.

“At 10, the tanker came and rescued us. I want to call home to tell them that my brother died.”

Attempts to find any survivors were continuing but were being hampered by very rough conditions and the chances of finding anyone alive appeared slim.

The latest tragedy in the Mediterranean came the day after another incident in which it is feared dozens may have drowned after the sinking of another dinghy, from which there were only 15 survivors.

UN refugee agency (UNHCR) officials said on Tuesday that dozens of people likely perished before a merchant ship reached that dinghy, which was of a type that normally have had 100-150 passengers packed on board.

The survivors were on Tuesday on board Italian coastguard ship the Diciotti en route for the Sicilian port of Catania.

Exactly how many people died will not be known until it arrives but it would be unusual for traffickers to set sail from Libya with as few as 15 people on board.

The coastguard said a total of 298 people were rescued in three operations on Tuesday, taking the total rescued since Saturday to 2,600.

The coastguard confirmed the recovery of five corpses on Monday and SOS Mediterranee staff said they had seen another one floating in the water but had been unable to recover it.

The migrants rescued by the Aquarius included a large number of minors – 24 on Monday, including three under five, and 47 on Tuesday.

One young boy who was plucked unconscious from the water on Monday was said to be in a stable condition on the Italian island of Lampedusa after being helicoptered off the rescue boat.

“He had inhaled fuel fumes and sea water but happily we got him in time,” said Sarah Giles, one of the on-board doctors working for the Medecins Sans Frontieres charity.

He was unconscious for two hours but we were able to stabilize him before he was evacuated.”

Other survivors, the doctor said, were suffering from symptoms of extreme trauma, hypothermia and intoxication and burns caused by fuel fumes. Many were in a critical condition.

“Nobody should have to endure such conditions,” said Mathias Menge, coordinator of the SOS Mediterranee rescue team.

“This latest tragedy underlines once more the dangers of the Mediterranean and the pressing need to maintain search and rescue operations throughout the winter.”

The latest deaths add to a tally of 4,271 mostly African people who have died trying to cross the Mediterranean this year, according to the UN refugee agency.

This year is already the deadliest on record for migrants trying to reach Europe with uncertainty about the situation in conflict-torn Libya fuelling a higher volume of departures in difficult weather conditions at the onset of winter.