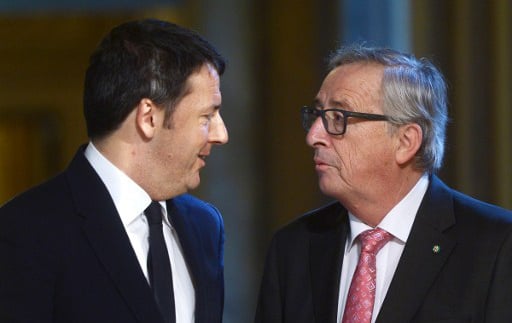 The European Commission said the budgets for Spain and Portugal were also problematic, just a year after the two countries became the first to officially face sanctions for public over-spending.

But the commission, the executive arm of the European Union, dropped a threat to suspend EU funds for Lisbon and Madrid.

The other countries warned by the Commission of problem budgets were Belgium, Finland, Slovenia, Cyprus and Lithuania.

The Commission said the draft budgets for the eight countries “pose a risk of non-compliance with the requirements for 2017”, putting the governments under the threat of fines and frozen EU funding.

EU Economics Affairs Commissioner Pierre Moscovici tried to downplay the negative opinion against Italy, pointing to the extra costs a handling a series of earthquakes and the migration crisis.

“For Italy, a significant part of deviation is due to the costs associated with seismic activity in the country which has been very serious this year and dramatic,” Moscovici told a news briefing in Brussels.

The EU “will take that into account,” he added.

But the warning against Rome comes as tensions between Renzi and the EU have reached a boiling point ahead of a December 4th referendum on constitutional reform, which could trigger his departure from office if the changes he has championed if it fails.

The Italian premier told a campaign audience last week that “the time of diktats (from Brussels) is over”.

That came a day after European Commission President Jean-Claude Juncker said he “could not give a damn” about recurrent Italian criticism of Brussels.

Renzi has ramped up the anti-EU rhetoric, underlining his opposition to what he regards as counterproductive fiscal restraints enshrined in the bloc's Stability Pact budget rules for member countries.

The decision against Spain, stuck in political limbo for almost a year, also comes at a sensitive time.

Rajoy's caretaker government had sent a draft 2017 budget to Brussels which included a forecast that the public deficit would come in at 3.6 percent next year.

But the European Commission has ordered Madrid to lower the deficit down to 3.1 percent, which will require roughly 5.5 billion euros ($6.1 billion) in budget cuts.