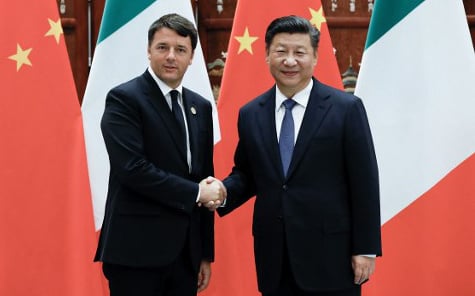 In an operation dubbed “White Collars”, the GDF financial police said they had ordered 15 arrests and 111 raids on premises across five regions as well as placing another 83 people under formal investigation.

The moves were ordered by a prosecutor based in Prato, an outlying suburb of Florence that is home to one of Europe's largest Chinese communities.

Some 400 officers were deployed as part of an investigation into clandestine immigration, the forgery of residency permits and criminal association, the GDF said in a statement.

It added that the investigation was focused on a number of Italian and Chinese professionals and businessmen, most based in Prato.

Xi was due to spend Wednesday on the Italian island of Sardinia in a stopover en route for a three-country tour of Latin America. The Chinese President was to be treated to dinner by Italian Prime Minister Matteo Renzi, who has made improved trade and investment ties to China one of the priorities of his administration.

Relations between the police and the Chinese community in Prato were strained earlier this year when a raid on a textile factory suspected of breaching labour laws ended in violent clashes involving 300 people, two arrests and injuries to four policemen.

Beijing made representations to the Italian authorities over the June incident, urging them to ensure that Chinese nationals were not being targeted unduly.

Days after the mini-riot, police made a series of raids connected with an investigation into a Chinese association suspected of organizing vigilante patrols of Prato's Chinatown which allegedly targeted African and Arab residents.

Italy is home to more than 270,000 Chinese nationals. A fifth of them are self-employed and the Leone Moressa foundation estimates that the community contributes six billion euros a year to the Italian economy.

But the Chinese are also regularly accused of showing no interest in integration, of sending millions in untaxed profits back to China and of sidestepping labour and immigration laws.

Officials in Prato say sweatshop exploitation in the textile sector has diminished since a 2013 fire in a garment factory left seven people dead.

It emerged afterwards that the workers had been living in the factory and were unable to escape because the windows were barred.

Prato is officially home to some 16,000 Chinese nationals out of a total population of 191,000. But local sources say the real figure could be closer to 50,000.