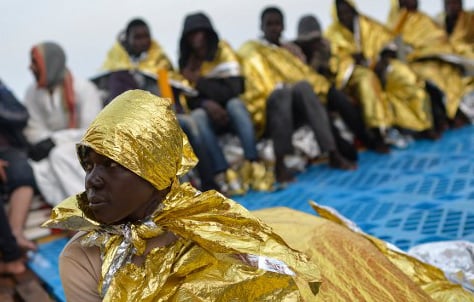 Migrants and refugees aboard one of the rescue ships. File photo: Andreas Solaro/AFP

The last five days in the seas off Libya have been busier than the whole of November last year, with over 3,200 migrants rescued, at least 17 found dead and another 340 declared missing.

On Thursday, details emerged of yet another shipwreck, with just 27 survivors describing how they clung to a deflated dinghy for hours before rescue arrived, too late to save around 100 fellow passengers.

With 8,000 arrivals this month and rising, and a record 27,300 arrivals last month, it is clear neither people traffickers nor migrants are dissuaded by the worsening weather conditions from attempting the perilous crossing.

But most of the aid group ships that have played a vital role in relief efforts this year will have returned to port by the end of November, some because they are not designed for winter weather, others to undergo essential maintenance.

“It has been a very long year for the crews and the ships,” said Pete Sweetnam, director of MOAS, the Maltese aid group which in 2014 was the first to charter a private rescue vessel off Libya.

This year, a dozen ships patrolled off the North African country's coast, chartered by MOAS, Doctors Without Borders (MSF), SOS Mediterranee, Save the Children, the Spanish Proactiva Open Arms and German Sea-Watch, Sea-Eye and Jugend Rettet.

According to the Italian Coast Guard, which coordinates relief efforts in the area, the aid groups carried out over 20 percent of rescue operations.

But they also saved many lives by detecting dinghies in difficulty, distributing lifejackets and offering emergency help while waiting for bigger boats to arrive.

The aid groups have “filled the gap created by states”, Eugenio Cusumano, political scientist at the University of Leiden in the Netherlands and author of a study on the NGO boats, told AFP.

The current European military presence – the anti-smuggling operation Sophia, border control agency Frontex and Italian navy and coastguard – are tasked with control and border protection rather than rescue missions, he notes.

As the aid group boats retreat, the coastguard has been forced to increasingly resort to directing cargo ships or oil tankers, ill-equipped to handle rescues, to the scenes of dinghies in trouble.

“The unending rescues and high number of victims in recent days show how critical the situation is in the Mediterranean, it is a real humanitarian catastrophe that is taking place before our very eyes”, said Sophie Beau, head of SOS Mediterranee.

Fearful of pulling back and abandoning migrants to their watery fate, the Aquarius, chartered by SOS Mediterranee and MSF, will patrol all winter. And if necessary, the MSF's Bourbon Argos and MAOS's Phoenix will also try to extend their operations.

But all this comes at a cost – 11,000 euros ($11,800) a day for the Aquarius – while the donations that flooded in after the photos of little drowned Syrian Aylan Kurdi hit the front pages in September last year have begun to dry up.

“There is a migration crisis fatigue. The public knows about the situation, they have heard too many heartbreaking stories,” says Cusumano, while Sweetnam also notes “a noticeable shift in public opinion” about migrants.

Aid groups have been urged by some anti-immigrant parties to leave migrants to drown to dissuade others from attempting the crossing. The suggestion is “morally wrong and factually incorrect,” says Cusumano, adding that when Italy suspended its Mare Nostrum rescue operation at the end of 2014, departures increased.

“The bottom line is, it should not be done by us. The EU has to take responsibility for the situation it has caused,” said SeaWatch spokesperson Ruben Neugebauer.

The EU has launched a mission to train the Libyan coast guard in the hope that doing so will stem the flood of departures.

It has said it wants the Libyans to be able to patrol their own waters by next summer, but aid groups say the emergency is now. Loris De Filippi, director of MSF Italy, called on European countries to reflect: “relief operations cannot be left to NGOs”.