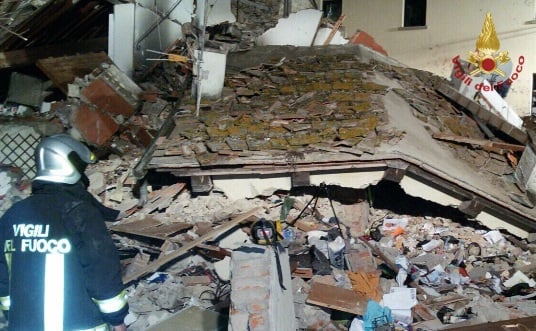 The remains of the house. Photo: Vigili del Fuoco

The incident took place in Bagno a Ripoli, a Tuscan town about 7km from Florence, and police believe the explosion was due to a gas leak.

A family four lived in the house. The father and one of the two daughters, aged seven and ten, were rescued from the rubble by emergency services shortly after the incident, while the other daughter was able to pull herself out.

The mother’s body was not recovered until several hours of searching, at around 2am.

Fire fighters shared the below video of their rescue work. On Friday morning, they said they were working to secure the area and ascertain the causes of the explosion.

The family are now being treated in hospital for burns and suspected poisoning.

The mayor of the town, Francesco Casini, expressed his sadness at the woman's death but praised the quick work of emergency services. “The house doesn’t exist any more, and there is visible damage to other houses in the complex,” he said.