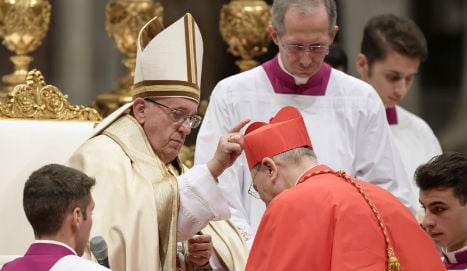 Mario Zenari, Papal envoy to Syria, is made a cardinal. Photo: Tiziana Fabi/AFP
Three of them are from the US, while others come from corners of the world where the Catholic Church needs a boost. Dressed in red robes, these “princes of the Church” will kneel before the pontiff to pledge their allegiance in a solemn ceremony known as a consistory.
Thirteen of them are under 80 and therefore eligible to take part in the next secret conclave to elect or become the head of the world's 1.2 billion Catholics. They are known as cardinal electors.
History's first Latin American pope is famed for wanting to reach out to far-flung dioceses often overlooked by Rome and he has shunned European candidates almost entirely, favouring low-key, pastoral figures or men he
knows.
The cardinal electors come from Bangladesh, Belgium, Brazil, Central African Republic, Italy, Mauritius, Mexico, Papua New Guinea, Spain, the United States and Venezuela.
The pope will give each man a three-cornered red hat, telling them that the colour symbolises “your readiness to act with courage, even to the shedding of your blood” for the Catholic Church.
They will also be handed a gold ring of their high office.
The unexpected pick of three Americans reverses a trend that saw Francis pass over US candidates in his first two consistories.
By choosing archbishops Blase Cupich of Chicago, Joseph Tobin of Indianapolis and Bishop Kevin Farrell of Dallas, Francis has “engineered what may prove to be a seismic shift in the Catholic hierarchy in the United States,” wrote expert John Allen on the US Catholic website Crux.
The three, from Church's “progressive wing”, may help counterbalance a strong conservative presence among US cardinals, particularly at a moment when the authority of reform-minded Francis is being challenged by US-led
traditionalists.
The youngest of the new cardinals is 49-year old Dieudonne Nzapalainga, the archbishop of Bangui, who organised the pope's 2015 visit to Central African Republic, where Francis opened the first “Holy Door” outside of Rome.
Others from developing countries are Sergio da Rocha, archbishop of Brasilia, Patrick D'Rozario, archbishop of Dhaka, Baltazar Porras Cardozo, archbishop of Merida in Venezuela, and Maurice Piat, bishop of Port-Louis in
Mauritius.
Some come from areas where Catholics are a distinct minority: Patrick D'Rozario of Bangladesh comes from a country where Christians represent just 0.03 percent of the total population, and only fifty percent of those are
Catholics.
The sole Italian cardinal-elect is Mario Zenari, who is currently the papal envoy to Syria. “It is hard to find, among these names, one that is not signed up to Francis's invitation to the Church to foreground mercy,” said Vatican watcher Austen Ivereigh.
Among the four “red hats” over 80, who are given the title for service to the Church, is Albanian priest Ernest Simoni. The 88-year old reduced Francis to tears in 2014 when he recounted the two decades he spent imprisoned for his faith during Albania's brutal communist rule.
Francis has now named 44 cardinal electors, just over a third of the total of 120 allowed by Church law.