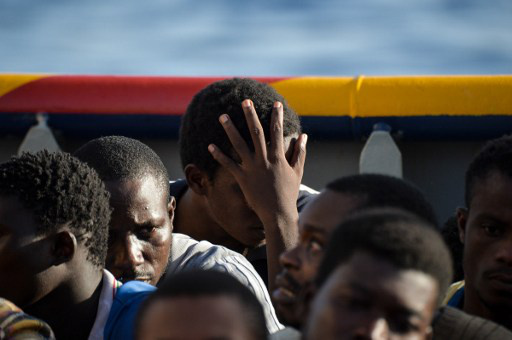 File photo of refugees and migrants aboard the Topaz Responder after a rescue earlier this year: Andreas Solaro/AFP

Confirming the latest fatalities in what is already a record year for migrant deaths in the Mediterranean, Italy's coastguard said 1,397 people had been saved in 12 operations between Monday evening and Tuesday afternoon.

The rescues will take the number of migrants to have arrived in Italy by sea this year to almost 170,000, a whisker short of the previous record set in 2014.

A coastguard boat recovered seven bodies and oversaw the rescue of 182 people from a stricken rubber dinghy in waters off Libya. The other confirmed victim, a man, died on the Topaz Responder, a boat operated by Malta-based charity MOAS with a Red Cross medical team onboard.

Three others were in a critical condition: a woman who was helicoptered off a coastguard boat after suffering cardiac arrest and two people on the Responder who were transferred to coastguard speedboats suffering from hypothermia.

MOAS said survivors' accounts suggested that “many” people were unaccounted for, including the mother of two children who survived.

The organization said it had help rescue some 600 people in four difficult operations, including 117 from one sinking dinghy.

The vessel of choice for people traffickers operating out of Libya, such dinghies typically have between 120 and 150 migrants crammed onto them.

“The doctors managed to revive several people with hypothermia but it was too late for one of them,” MOAS spokeswoman Maria Teresa Sette told AFP.

The coastguard said the 12 stricken boats assisted in the latest rescues included one larger wooden vessel that was was carrying 450-500 people, six smaller wooden boats with a few dozen people on board and five dinghies.

Unusually, the survivors included “many families” from Syria, according to MOAS, as well as people from the Palestinian territories, Lebanon and Sudan.

Of late, migrants leaving Libya have been overwhelmingly from sub-Saharan or East Africa with a much-anticipated surge in the numbers of refugees from Syria's war having failed to materialize following the de facto closure of the Turkey-Greece migrant route earlier this year.

The latest victims will add to a total of 4,655 migrants confirmed to have died or disappeared in the Mediterranean so far this year, according to counts by the International Organisation for Migration and the UN refugee agency.

The vast majority of the migrants landing in Italy come from Africa and begin their sea crossings from Libya, typically paying traffickers several hundred dollars for the crossing.

With Italy's neighbours having tightened their borders, the numbers being housed in reception facilities spread across the country have risen to an unprecedented total of over 176,000, prompting howls of protest from some local authorities.

Many migrants arrive in Italy with the intention of travelling north, often to try and rejoin relatives, with Germany and Sweden among the popular destinations.

One such man, thought to be from Eritrea, died overnight while trying to board a freight train travelling from Italy to Austria via the Brenner tunnel through the Alps.

The man was hit by a train moving in the opposite direction near the main station in Bolzano, close to the border.

Police said the incident was the first of its kind for Bolzano. Recent weeks have seen several migrants killed by cars while trying to cross from Italy into France at their coastal border.