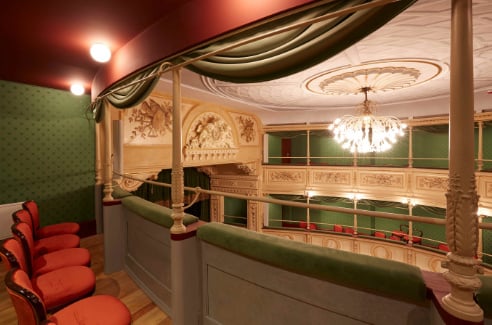 The Teatro Gerolamo is not just the latest member of the city's thriving theatre scene – it is also one of its most unique.

That everything is indeed miniature owes to the Gerolamo's original function as a theatre for children. The auditorium, which now seats 209, was the first in Europe designed for marionette shows.

But it is for its part in the renaissance of Milanese theatre that the Gerolamo was most instrumental.

Works in the local dialect had been performed by companies such as the Accademia del Teatro Nuovo since the theatre's inception, but Mussolini's widespread project of “Italianisation” almost killed off the tradition.

That was before Giorgio Strehler, the legendary Italian theatre director, renewed interest in the form with a 1955 production of the dialect play El nost Milan by Carlo Bertolazzi.

When, five years later, the actors he had sourced from various disbanded groups formed their own company – the Compagnia Stabile del Teatro Milanese – they chose the Gerolamo as their home.

Built in 1868 in Piazza Beccaria, less than ten minutes' walk from La Scala, the Gerolamo was designed by Giuseppe Mengoni – the man best known for devising Milan's Piazza del Duomo and the Galleria Vittorio Emanuele II, from whose roof he fell to his death whilst overseeing construction.

Large portions of Milan were then being redesigned during a dynamic period following the liberation of Northern Italy from Austrian occupation by King Emanuele and Napoleon III in 1859.

Fashioned from timber reclaimed from the construction of the Galleria, the Gerolamo's neoclassical interior harks back to Hapsburg-era grandeur. Real estate company Sanitaria Ceschina has restored the horseshoe auditorium to a condition worthy of its secondary sobriquet “la bomboniera” (the box of sweets).

Three rows of boxes are skimmed with designs in papier mâché, plaster and stucco, featuring overlapping instruments, eminent playwrights in profile and three models of the “maschera di Gianduja” – the Torinese commedia dell'arte character whose first name, Gerolamo, the theatre takes as its own. Only the auditorium's upholstery has been subject to a makeover. Restorers Alessandra Caccia and Francesca Bazan suggest that the original sumptuous red lent a heavy atmosphere. Now, the auditorium sparkles in emerald green.

Structural additions include a bar, conference rooms and a small library on specially-constructed upper and underground levels, connected by way of a modern concrete stairwell.

Such facilities, it is hoped, will allow the Gerolamo to participate in some of Milan's highest-profile cultural events, including the world-famous design and furniture fairs.

The theatre is poised to return at a time that Milan's performing arts is booming, with large-scale restorations currently underway or recently completed at four of the city's most important theatres. And recent data suggests that the city is successfully cultivating sustainable audiences of the future. Between 40 and 45 percent of season ticket holders at the Teatro Piccolo, Italy's pre-eminent theatre, were under the age of 26 in recent years, while the number of under-40's in La Scala's audiences has risen by 20 percent, a survey from MAKNO revealed last week.

Yet the Gerolamo will stand out for the sheer diversity of its programming. While details are still to be released, artistic director Roberto Bianchin has said that there will be jazz concerts, contemporary dance, acoustic sets, monologues and plays.

An inaugural gala event, featuring local ensemble laBarocca with a programme of Mozart and Vivaldi, demonstrated that this acoustic is perfect for performances of chamber music. The theatre's individual history will not be forgotten, however.

The Gerolamo, Bianchin assures, will rise again as Milan's primary venue for theatre in dialect and marionette shows.