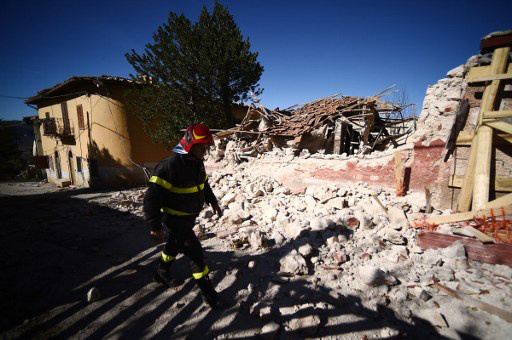 Destroyed houses in the town of Norcia. Photo: Filippo Monteforte/AFP

Ten-year-old Laura, who comes from the town of Ne in Liguria, sent a letter to the mayor of Norcia, which was close to the epicentre of a 6.6 magnitude quake in October – Italy's biggest in 30 years.

She enclosed her €5 pocket money to go towards the recovery efforts, and said that while it was only “a small help”, she hoped her gesture would encourage others to do the same.

Her act of kindness resonated with residents of Norcia and its mayor, who recently joined mayors of other affected towns in speaking out about their need for help and concern over being forgotten.

Laura wrote: “Every evening I see your town on the television, and it makes me so sad. My parents showed me the photos they took in your city several years ago.”

Her note has been shared more than 2,000 times on Facebook.

“These €5 are worth five million,” read the highest-rated comment, from Massimiliano Vita. “This made me cry.”

Plenty of others praised the girl's parents for raising her to be altruistic and to think of others.

Norcia was badly hit by a major quake, measured at 6.6 magnitude, in the morning of October 29th. While there were no serious casualties, the shock – which was felt in Rome and even Venice – left thousands temporarily homeless and the town's infrastructure and historic buildings badly damaged.

It was Italy's biggest quake since a 6.9-magnitude one struck the south of the country in 1980, leaving 3,000 people dead.

Since the first quake the area has suffered thousands of aftershocks, including one of a 3.6 magnitude at 1am on Wednesday morning.

Prime Minister Matteo Renzi has vowed to rebuild the region and the government has already allocated funds to the recovery of Norcia as well as Amatrice, a town hit by a 6.0 magnitude quake which killed 299 in August.

“We need to rebuild quickly,” Nicola Alemanno, Norcia's mayor, said in a meeting in Italy's Chamber of Deputies. “Our culture and our identity are in those stones. We need a concrete and immediate response.”

The most important architectural casualty of the tremblor was Norcia's 14th-century Basilica of Saint Benedict.

Built on the reputed birthplace of the Catholic saint, it had survived dozens of quakes over the centuries. But it had been compromised by other recent tremors and Sunday's saw it collapse in on itself with only the facade left standing.

The video below shows Italy's 'Monuments Men' working to stabilize a tower in the city.