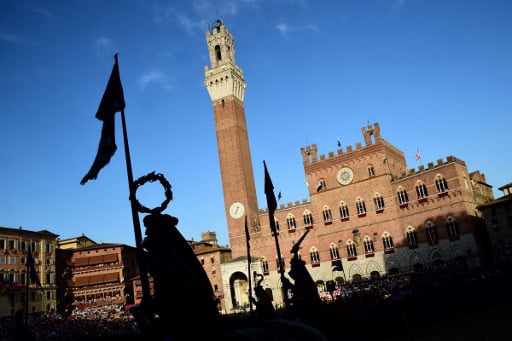 A parade during the historic Siena Palio. Photo: Giuseppe Cacace/AFP

But while the Monte dei Paschi di Siena (BMPS) is clinging to hope a last-ditch rescue scheme will prevent it from being wound down after years of ills, Siena is having to learn to live without its patronage.

“The whole city felt the crisis,” local businesswoman Susanne Michel told AFP. “The 'Monte' was a lung that many depended on”.

Pensioner Laura, 57, who did not want to give her last name, agreed: “The Monte crisis has ruined Siena”.

“The bank used to help businesses and associations, but all that's gone. We've had to cut spending. It's changed everyone's lives.”

BMPS – which was founded in 1472 as a charitable “mount of piety” and went on to become Italy's third largest financial institution – has recorded abysmal losses and was found to be Europe's weakest major bank in tests this year.

It has been plagued by years of bad management: severely weakened by the disastrous acquisition in 2007 of the Antonveneta bank, for a sum double the estimated going price, it was then hit by scandal, its leaders accused of fraud and embezzlement.

The foundation linked to the bank – which pumped generous donations into Siena to fund everything from the restoration of dilapidated Renaissance buildings to the sponsoring of football clubs – saw its resources collapse.

As the controlling shareholder of BMPS, the foundation for a long time had cash to splash, from financing academic scholarships to sponsoring the city's prized Palio horse race.

But squeezed hard by the crisis, the foundation, which now holds just 1.49 percent of the bank, was forced to sharply reduce the amounts given to the city.

It received just 3.0 million a year in 2015 and 2016. The turnaround plan for the bank will go to a shareholder vote on Thursday and the city's 50,000 residents fear job losses if it fails.

“There was a symbiosis between the city and the bank,” said Carlo Alberto Carnevale Maffe, professor at Milan's Bocconi University.

“The Monte is the only big company in Siena. It was a 'company town', with a role like that of the car for Detroit” in the US, he said.

But the relationship became “incestuous”, creating “conflicts of interest with the political sphere”, he added.

City council representatives sat on the foundation's board, while several mayors became presidents of the bank. BMPS “distributed tens of millions of euros in dividends that it should probably have used to strengthen its capital,” Carnevale Maffe said.

Deputy mayor Paolo Mazzini, who came to power with the centre-left administration in 2013 following the scandal, said the bank's power “became too much for such a small city”.

“The city was self-centred,” and the foundation's money allowed it to do “many things, perhaps too many, with sports teams competing on a national level, expensive exhibitions,” he said.

Now the council has to go hat in hand to the regional authorities and ministries in Rome to get the funds to finance projects.

Francesco Frati, rector of Siena university – founded in 1240 and which has 18,000 students – said the city will have to rethink its objectives. But while the Tuscan hill town – a UNESCO World Heritage site – may be temporarily down, it is far from out, he says.

“Siena has an ancient cultural tradition, an extraordinary heritage and a university which is at the forefront in many disciplines,” he said, citing growth not only in tourism but also in research in subjects like life sciences.