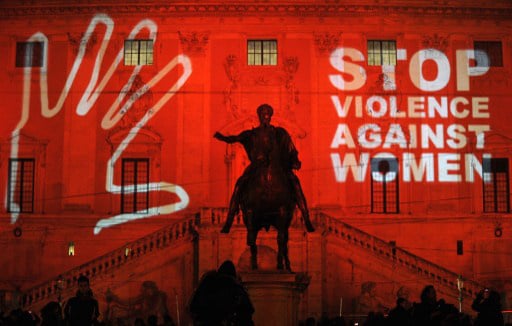 A projection reading 'Stop Violence Against Women' on Rome's Campidoglio during a previous event. Photo: AFP

Over 100 women are killed in Italy by men each year, the vast majority by their partners or ex-partners.

In the first nine months of 2016, 116 women were victims of femicide (defined as murder of a woman related to her gender).

The most recent victim was 29-year-old Elizabeth Quispe, who was strangled at home while her two children were in the house. Quispe was killed by her partner, whom she had recently reported to police for stalking.

Almost 3.5 million women in Italian have been victims of stalking, according to data from national statistics agency Istat, but only 22 percent of those report the act or seek help.

READ MORE: How can Italy tackle violence against women?

Saturday will see events across Italy calling for action to be taken against gendered violence, including a march in Rome's Piazza della Repubblica at 2pm.

A full list of events taking place to mark the day can be found here.

Laura Boldrini, Italy's President of the Chamber of Deputies and a vocal supporter of women's rights, published a selection of the sexist insults and graphic death and rape threats she has received over Facebook. The politician and former journalist said she wanted to “draw attention to an increasingly frequent and unacceptable phenomenon: the use of social media for violent and threatening messages.”

She posted the comments including posters' full names and profile pictures, and the post has been shared more than 20,000 times.

“I decided to do this for the many who have the same reality, but don't feel able to make it public and so suffer in silence […], because those who express themselves in such a sordid and obscene way deserve to be made public and take responsibility for it,” Boldrini commented.

The problem of online abuse has been in the spotlight in recent weeks following the suicide of a young woman, Tiziana Cantone, after a sex tape was circulated online.

After Italy's privacy tsar ruled that an Italian court had been wrong not to consider the online publication of a sex tape an illegal breach of privacy, several similar cases came to light, prompting Italy to give the go-ahead to an 'anti-cyber-bullying' law.

However, some of the initiatives intended to draw attention to gendered violence and show support for women's rights have drawn criticism.

The advert shows several young children discussing their hopes for future, saying they will become a police officer, a stylist, or a teacher. It ends with one young girl saying: “When I grow up, I'll end up in hospital because my husband will beat me.”

An open letter from Non di Meno said: “Violence against women is not a destiny, it's not a sentence, it's not inevitable,” and asked the broadcaster to take the “damaging and offensive” advert off air.

The letter added that in the advert, the girl's identity is reduced to her status as a victim of violence.

In addition to the various awareness campaigns, Italian politicians used the day to announce initiatives aimed at combatting the problem of violence directly

He described domestic violence as “the abandonment of fundamental values of civilization” which constituted “a wound for the entire society”, and said the government hoped to tackle the problem through better education relating to sex and relationships, as well as offering more support to victims.

Italy has just passed a law allocating €5 million each year to victims of domestic violence and their children. This money will go to 'anti-violence' programmes, local organizations and centres for abused women.

The country has stepped up its efforts to tackle the problem since a damning United Nations report labelled domestic violence “the most pervasive form of violence in Italy”.

Changes pushed through in the past few years include the obligatory arrest of those caught in the act of stalking or physical abuse, and a law meaning that, once lodged, legal complaints could not be withdrawn, and that victims must be kept up to date on their attacker's legal status.

And there are promising signs that the crackdown is working.

For example, an increasing number of men are asking for professional help to deal with anger and violence issues. The CAM centre in Florence, which assists men at risk of turning violent, received just nine requests for help in 2009 when it first opened, a figure which has risen to 85 in 2015.

In the first nine months of this year, 66 requests had been made, suggesting an increased awareness on the part of violent men, and a willingness to change.

What's more, all forms of gendered violence saw a decline over the past year in Italy, according to Interior Minister Angelino Alfano. Speaking on Friday, he said that sexual assault had declined by 13 percent and violent threats by 16 percent in the period November 2015 to November 2016.

However, he drew attention to the fact that the number of femicides had fallen by only three percent and that more, continued action was needed.