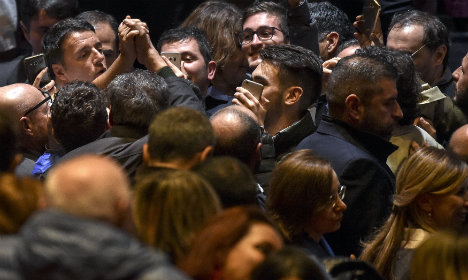 Italian Prime Minister Matteo Renzi (L) greets supporters calling for a "Yes" vote to the upcoming constitutional reform referendum. Photo: Andreas Solaro/AFP
As the youngest leader of a G7 economy, Renzi would seem to have youth and time on his side.
But listen to young people in Naples and it can appear that the fresh-faced, 41-year-old has neither.
“How exactly will it change our lives?” snorts Gaia Ievoli, 20, when asked what she thinks of Renzi's proposal to streamline Italy's parliament by drastically curtailing the powers of the second chamber, the Senate, while shrinking its membership and running costs.
Voting for the first time, Ievoli insists she will cast her ballot in support of a 'No' campaign whose leaders have grown increasingly confident of emulating Brexit and Donald Trump's triumphs to make it a 2016 hat-trick of rebuffs for the political establishment.
As Ievoli sees it, constitutional fine-tuning is far from being an obvious priority in a country where high unemployment and declining real incomes have left the younger generation facing worse living standards than those enjoyed by their parents, and prompted tens of thousands of emigrate in recent years.
“More job security for the young” would be top of her to do list, says the waitress, currently waiting to learn if her downtown bar will take her on permanently.
A few less senators “isn't really going to change things,” she says.
Federica Nicosia, 25, considers herself relatively lucky because she has managed to obtain a prized steady job on a permanent contract in a nearby cafeteria.
But she says the prevailing mood is one of bitterness with the way things are going, and is not even sure she will bother to vote on Sunday.
“I don't know yet. I will probably make up my mind at the last minute once I have found out something about this reform, which seems too complicated to me and not really designed for us.”
Renzi's proposals for the Senate are designed to go hand-in-hand with a new electoral reform law designed to ensure elections produce winners with clear majorities.
As he sees it, it is about modernising Italy, putting an end to endemically weak administrations and logjams in parliament which have stymied equally overdue reforms in areas ranging from education and the snail-paced judicial system to the fight against corruption and organised crime.
He has urged voters not to “waste this chance to change Italy”.
But according to Elena Piccolo, a 21-year-old student of Classical Literature at the city's Federico II university, the bullish young leader made a fatal mistake in making the referendum all about him with his suggestions he could walk away from politics if the outcome goes against him.
“Renzi was wrong to personalise the ballot, which he did from the beginning by saying he would resign if the No camp won,” Piccolo said.
“By doing that he simply made himself a focus for all the disenchantment in the country, including that of young people,” she added, confirming that she plans to vote No on Sunday.
Like many young Italians, Piccolo says she has no confidence in the traditional political forces in the country but admits to being attracted by the “different voice” of the Five Star Movement, the populist party that was created by comic Beppe Grillo only seven years ago but has established itself as the biggest rival to Renzi's centre-left Democratic Party.
“I think we should give them a chance at running the country,” the student says.
Recent opinion polls have given the No side of the argument a clear lead and voters under 34 appear to be the most strongly opposed, although surveys also indicate that over a third of voters are undecided.
And while a victory for the No camp would be expected to trigger Renzi's resignation, most analysts are not forecasting immediate elections with a reshuffled centre-left administration tipped to continue at least until the end of next year.
“It seems paradoxical that it is young people that are most strongly opposed to this reform – but not all change is for the better,” says Anna
Basile, a 22-year-old student.
But not everyone in Naples is on the No side. Young electrician Antonio Medugno says he will be backing Renzi with a Yes vote. “Something has to change in this country,” he says. “And ifthis referendum is an opportunity to do that, we have to take it, because who knows when we will get the chance again.” 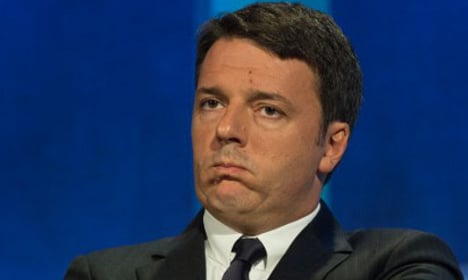 REFERENDUM
Britain’s Economist says ‘No’ to Renzi’s reforms. But why? 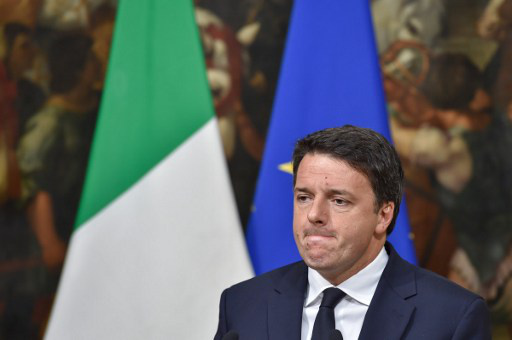