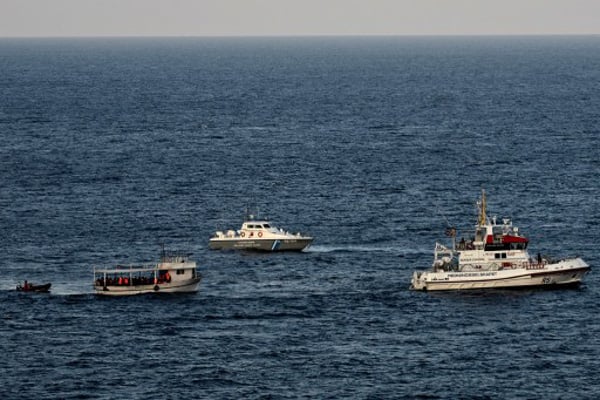 A Frontex boat, together with a Greek coastguard boat, escorts a boat carrying migrants and refugees. Photo: Aris Messinis/AFP

Confronted with Europe's worst migrant crisis since World War II, EU leaders have increased funding for the Warsaw-based agency responsible for policing the bloc's external borders and conferred upon it new responsibilities.

“Starting next year, Frontex will deploy three off-shore patrol vessels (OPVs) from Finland, Romania and France, which will have multi-national European crews for the first time,” the Warsaw-based agency said in a statement.

The agency's maritime operations currently involve single-nation vessels manned by their own crews, or a total of around 15 vessels near the Greek islands of the Aegean Sea and another dozen or so off the coast of Italy.

The exact locations of next year's multinational patrols are yet to be decided, according to Frontex spokeswoman Ewa Moncure, who said the crews “will go where the situation requires them”.

Members of the European Union (EU) and the passport-free Schengen zone have until December 15th to respond to the call.

Frontex chief Fabrice Leggeri said the multinational approach will allow EU members to contribute vessels for longer periods of time since they will not need to provide as many core officers.

“The rest of the crew will come from other member states in a true spirit of European cooperation at sea,” he said in the Frontex statement.