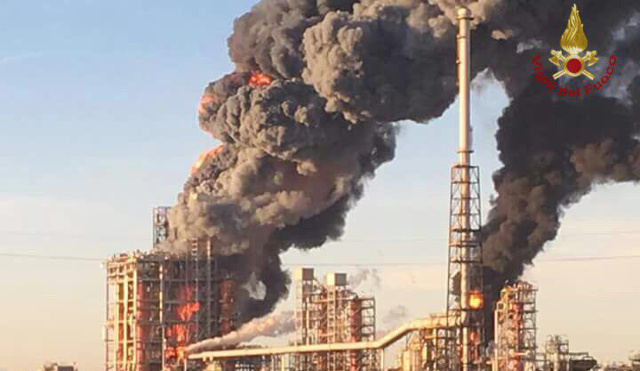 Dramatic photos showed smoke billowing into the air after the fire started late on Thursday afternoon at the refinery in the Pavia region.

Smoke clouds were visible even from towns up to 30 kilometres away from the plant, which is run by multinational oil and gas company Eni and is the third largest. The plant is not close to any residential zones, but there are s+everal farms in the area.

Italy's fire service said at 7:45am on Friday that the fire had been almost entirely extinguished after a team of 40 officers worked through the night. It is not yet known what caused the fire, after Eni denied initial reports of an explosion.

On Thursday evening and through the night, traffic to the area was closed off and residents urged to stay inside and keep their windows closed, but the warning was lifted early on Friday morning.

However, several schools in the area remained closed on Friday as a precautionary measure.

A view of the smoke from Tortona, around 30km away from the plant.

Investigations into the cause of the fire were ongoing, as well as medical checks on employees who may have inhaled fumes. Two employees had reportedly suffered intoxication due to fume inhalation, however they were not in serious condition according to local media reports.

The local health authority ruled out any risk to public health from the fire, while teams were working on Friday to assess whether there would be any damage to the environment.


Eni reassured residents on Friday morning that the fire had not caused any air pollution, and said that the company's emergency plan had been activated “with extreme timeliness”.

The President of the Italian Senate's Environmental Commission has asked for bosses of the plant to provide a full account of the fire, La Provincia Pavese reported.