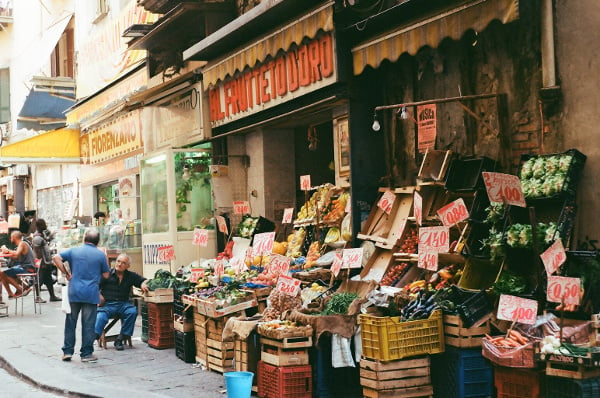 That’s how 28-year-old Ana describes Naples, a city she has grown to love but which is completely different to her hometown; bustling, modern Bucharest.

“Youngsters from Bucharest travel a lot and our Internet speed and infrastructure is among the best in Europe. Most importantly, there’s a thirst for learning about other cultures, so for example we never dub over films or TV programmes.” “Naples might be Italy’s third-largest city, but I feel more like Campania is a country, with Naples as its capital. They do everything differently here compared to other parts of the country: they have their own language, a different system of hand gesturing, and their own philosophies.”

“The defining trait I would say is sticking to the traditional way of doing things, postponing modernity – it seems immune to influences from the outside. Grandparents and family ties are a central element in every young person's life, whereas in Bucharest we often only remember to get together for the holidays.” Still, Ana has adapted. “Naples is my home now..It has an intoxicating charm that you have to discover first hand.”

The story of how she ended up here encompasses a lot of threads that will be familiar to other expats: a long-term fascination with Italy, its culture – and love. “Many Romanians identify as Latin first and foremost, despite the Slavic and Eastern elements of our language and culture. Growing up we are taught that we are descendants of the Dacians and the Romans, so there’s a feeling of brotherhood towards the Italians.”

“I believed the usual cliches – I thought Italians were elegant, romantic, theatrical. Now I know that it’s impossible to generalize.”

It was a film that inspired her to experience Italy for herself. While going through a rough patch in her own relationship, Ana watched ‘Journey to Italy’, a 1953 film which follows the breakdown of a couple’s relationship during a visit to Naples. “I related to the female lead while also being captivated by the city. That’s how I found myself booking a plane ticket.”

Since it was her first time travelling abroad on her own, she arranged accommodation via CouchSurfing so that she’d be able to get tips on exploring the city from a local.

“The host gave me an amazing tour of the city, we visited the Archaeology Museum I’d seen in the film, and before long I was back – this time as his girlfriend. That was two years ago.” Ana during a hike along the Amalfi coast. Photo: Ana Stanciulescu/Flickr

Taking the leap to move permanently came “naturally”, Ana says. “ “I was in love and I followed my heart.” But there were obstacles as a newcomer that she hadn’t encountered as a tourist.

For a start, while the similarities between Romanian and Italian meant she could understand the language quite well, she says she soon learned this didn’t work the other way round. What’s more, most people used the Neapolitan language rather than Standard Italian. “These days, I say ‘mamma mia!’ every five minutes and I’m constantly doing hand gestures. It’s part of learning the language and the way of life.”

Naples has changed her in other ways too. “I’ve learned to be calmer, to be more patient, to disconnect more from social media and most importantly to connect more with the people here: the vendors, the baristas, the bus drivers – everyone is so chatty and wants to wish you ‘buongiorno.” “I love listening to stories from older Neapolitans about growing up in a bucolic Italy, when wearing a bikini on a public beach could get you excommunicated.

Her work as a tour guide in the city has opened her eyes to the many surprises which await visitors. “You see the group arriving; curious and sometimes reluctant or anxious about being in Naples. Slowly, they embrace it.” “I wish people just came to visit Naples with an open mind as it is no longer in the sad condition of ten years ago”.

Her top recommendations for a perfect Naples experience are the underground network of caves and tunnels built by the Greeks 2,400 years ago, a visit to Trattoria Nennella in the Spanish neighbourhood (“try the aubergine parmigiana!”), and aperitivo in the trendy Chiaia area. She recommends the vibrant Pignasecca area, one of her favourite spots for photography and people-watching.

“I love to capture the scooters whizzing by, the glamorous mothers pushing strollers along dirty streets, the never-quiet Neapolitans and perplexed tourists.”

Would you like to tell The Local about your Italy, or write a guest blog for us? Get in touch at [email protected]