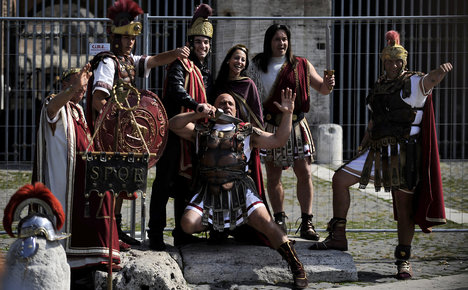 A photo with one of Rome's costumed gladiators (which is what they call themselves most of the time, despite usually dressing as Roman centurions) may seem like harmless fun, but city authorities have sought to crack down the practice after a string of complaints accusing the actors of overcharging or even pick-pocketing unsuspecting travellers.

The ban targets anyone portraying a historical subject – centurions are specifically singled out – in photographs or videos in return for cash.

Anyone caught flouting it faces a €400 fine, and authorities said the regulation was necessary in order to “protect public order” and safeguard the city's “cultural, artistic and monumental heritage”.

Another regulation targets rickshaws, banning any vehicle used for transporting people and using an electric motor – even if it is partially powered by pedals. The prohibition applies to the entire city, but particularly “the historic centre and major tourist attractions”.

These latest bans replace an earlier regulation which had expired on November 30th, prompting the gladiators to return to the city.

“In Verona, characters pay €10 in order to occupy land for a day; there's an online application and then they're allowed to work,” one of the centurions, a father of two who lost his job in sales, told Il Corriere on Thursday. “Why isn't that possible in Rome?”

Rome first decided to crack down on the unauthorized gladiators – whom authorities say make up to €12,000 a month charging tourists for holiday snaps – in November last year, when the city commissioner introduced an initial ban.

Updating these regulations was one of the first things Raggi did after her election, imposing the €400 fines in her very first council meetings.

So why does Rome have such a problem with the centurions?

One of the main issues is that the gladiators often aren't clear that that there's a charge for a photo with them, and while most savvy tourists manage to talk them down to a reasonable price, some are conned out of large amounts for a photo – particularly if they haven't worked out the conversion rate of their currency into euro.

Sometimes the methods used are even more clandestine. A viral video in the summer showed a Romanian TV crew getting their wallets stolen by a group of Colosseum centurions who took €100 as compensation for a couple of photos in front of Rome's most iconic building.

In the video, the Romanian film crew ask the onlooking police to help them get their money back but the forces of the law advise them it's better not to take action..

The new regulation is valid until the end of July 2017, and anyone caught flouting it could face a €400 fine.