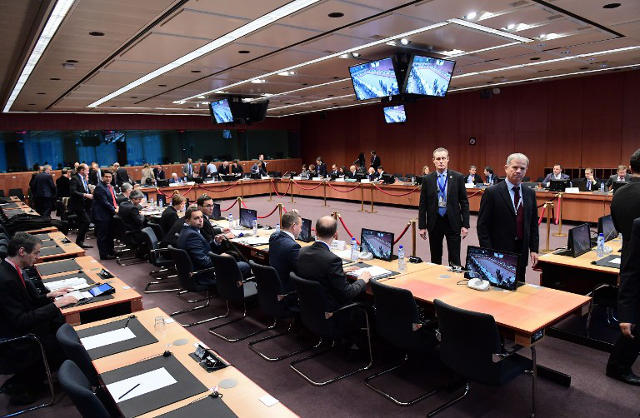 “It doesn't really change the situation economically in Italy or in the Italian banks,” said Eurogroup head Jeroen Dijsselbloem as he arrived for talks with the single currency's finance ministers in Brussels.

“There is no reason to talk about a euro crisis,” Schaeuble said. “I think we have to take this with a dose of serenity,” but added: “Italy urgently needs a government that is ready to act.”

The ministers gathered as the euro hit a 20-month low on Monday and most Asian stocks fell back, spooked by the new rise in uncertainty in Europe and a spike in anti-EU populism.

Italy's pro-reform Renzi resigned after his attempt to change the constitution was overwhelmingly rejected in a Sunday poll, leading to fears about the future of one of the eurozone's biggest economies.

The Italian finance minister Pier Carlo Padoan – the favourite to succeed Renzi – stayed in Rome amid the sensitive situation in Italy. Of major concern is the fragile state of some of Italy's top banks, including its third-biggest lender Monte dei Paschi di Siena (BMPS), which could fail under a pile of bad loans.

The eurozone ministers meanwhile also insisted the Italian vote was not linked to wider problems with an increasingly crisis-ridden EU including the rise of populist parties.

“The referendum was a question on domestic Italian politics… (It) was not about Europe, on European policy, or on the place of Italy in Europe,” said French Finance Minister Michel Sapin.

“Italy is a solid country, anchored to the European project,” Sapin added.