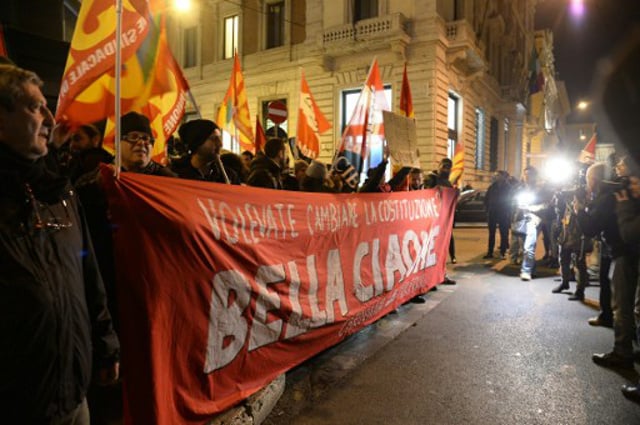 Supporters of the No campaign celebrate their referendum victory in Rome. Photo: AFP

Yes and no. Final opinion polls put the No camp convincingly ahead, but in the end they won with just shy of a 20-point lead, compared to the five point lead most pollsters had predicted.

James Newall, an expert in Italian politics and professor at the UK's University of Salford, says this wide margin comes as a surprise to most observers, who were bracing themselves for a much closer vote.

As to why the No campaign won, a combination of social, economic and political factors were at play.

“The win goes beyond anti-establishment sentiment – though that's a big part of it,” explained Newall. “Some people voted on the specific proposals, others as a protest against social and economic malaise, and crucially some voted against Renzi because he framed it as a referendum on his performance.”

READ MORE: Why Italy said 'no' to Renzi's reforms

2. What’s the next step for Italy?

Renzi announced his intention to resign – a promise he'd made early on in the campaign – an hour after polls closed, so Italy is set to get a new government, which will be tasked with a few key decisions.

Italy's political future is in the hands of President Sergio Mattarella, who spent several hours in talks with Renzi this morning and will have four options once Renzi formally tenders his resignation (which should happen after a Monday evening cabinet meeting).

He can refuse Renzi's resignation, invite Renzi or someone else (top picks are Finance Minister Pier Carlo Padoan or Culture Minister Dario Franceschini) to form a new government, or create a technocratic government with a limited mandate.

Snap elections – which have been called for by Five Star Movement leader Beppe Grillo and far-right Northern League leader Matteo Salvini – don't appear to be on the cards.

That would require Mattarella to dissolve the chamber of parliament, which Newall says would bring “chaos”, due to the fact that the current electoral law was designed to be used in tandem with the proposed constitutional reforms. Instead, we can expect the new government to pass a financial law and then update the electoral system ready for the next general election, which will probably be held in early 2018.

READ MORE: What should we expect after Sunday's referendum?

3. Is the referendum result good news for the Five Star Movement – and what about the other ‘No’ campaigners?

“Everyone sees what they want to see in the result,” Franco Pavoncello, president of Rome's John Cabot University, said.

“The Five Star Movement feel like they've won, while Forza Italia thinks it has both stopped Renzi and limited the possibility of the M5S coming to power.”

The Five Star Movement (M5S), which spearheaded the No campaign, will undoubtedly be strengthened by the landslide victory, as will the other groups which called for a No vote.

However, there's a peculiarity which means the win won't necessarily play into the hands of the M5S.

The proposed reforms were linked with Italy's electoral law, which gives the overall majority of seats to a party that gets 40 percent of the votes or wins in a run-off ballot – a system which would likely have benefited the populist M5S. But this law relied on the constitutional reforms being passed, and now that that's not happening, it must be changed before any election.

“The electoral system is likely to be updated in a way that does not favour the M5S,” Newall explained.

“Now, the party has taken an extraordinary position: they spent the whole campaign arguing against the electoral law, saying it concentrated too much power in the hands of the Prime Minister. Now they're calling for elections on the basis of that electoral law – because it gives them the best chance.”

Pavoncello added: “There's a difference between being able to master a protest vote and being able to offer an alternative government, and if they ever did win power, it's very likely that people would be rapidly disillusioned. Once you're in government, you have to make decisions which not everyone will agree with.”

Another big 'winner' from the No vote is local government, who continue to enjoy significant power: the proposed reforms would have seen much of this re-centralized.

4. Should we be concerned about all this talk of political and financial turmoil?

While Renzi himself was firm throughout the referendum campaign that he didn't anticipate “any major disasters”  in the event of a victory for No, fears were raised of the problems that could be caused by an unstable government – including economic worries. On Monday, the euro briefly dropped to a 20-month low, but on the whole, market reaction has been subdued.

“The decisiveness of the result means we'll see less uncertainty than could have been expected if it had been closer,” said Newall. “It was a clear result, with a clear message: Business as usual.

“In financial and markets, I expect that a 'wait and see' attitude' will be dominant.”

5. What does this mean for Europe?

Not much – for the moment, at least.

There are two key reasons many observers have linked this referendum on a domestic issue to the EU. One is that Renzi is seen as having strong ties to Brussels, and the other is that the No campaign was spearheaded by the eurosceptic M5S, which has previously called for a referendum on Italy's membership of the euro (but not the EU).

However, not all of the support for No came from fans of the M5S, not all of the Movement's supporters share the party's eurosceptic stance, and as explained above, they're not necessarily likely to gain power in the near future.

“For the moment, there's no reason to be alarmed about the future of the EU,” said Newall. But whether that remains the case will depend on developments over the coming days, weeks and months.”

Pavoncello notes that the No vote encompassed pro-Europe groups alongside the eurosceptic M5S and Northern League, and emphasized that the M5S has toned down its commentary on Europe in recent weeks. “They have sent mixed messages about the EU since the Brexit vote. Plus, what they want is a referendum – they're not calling for Italy to leave the EU or even the euro,” he said.

Still, there are certainly anti-establishment aspects to the vote, and that includes disillusionment with the EU. The referendum result may act as a wake-up call for Europe to  pay more attention to Italy, which has been hard hit by both economic troubles and the migration crisis.

“The vote is a sign of dissatisfaction,” Pavoncello said. “People want Europe to step in and give more dynanism to the economy.”

6. How likely are new reforms?

The necessity of reforms in Italy is agreed upon by pretty much everyone, including those who were opposed to Renzi's proposals. But we're unlikely to see alternative reforms for a while.

Pavoncello said the country was “on standby” and that aside from the electoral reform, “I don't think we'll see any kind of dynanism or forces pushing for any kind of reforms now.

“Italy hasn't been able to reform for 70 years, it's very difficult to achieve.”

Newall agreed, pointing out that Italy will only be able to have “real reforms” if some kind of cross-party agreement can be reached.

Otherwise, Italy risks repeating the same situation it's just experienced: all the opposition groups coming together to reject any reforms posed by the party in power.