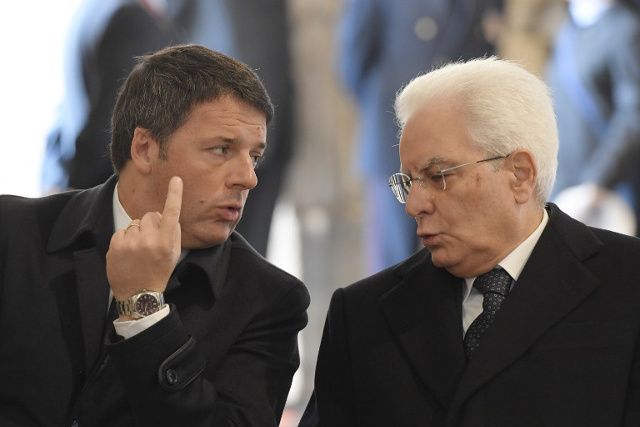 Renzi's exit on Monday after a crushing referendum defeat over constitutional reforms unleashed the political hounds, with all parties vying to take advantage of the power vacuum.

US President Barack Obama on Tuesday called Renzi from Air Force One, thanking Renzi “for the close friendship and partnership the leaders enjoyed” during his tenure as prime minister, the White House said.

“The president emphasized that Italy will remain one of the United States' closest and strongest allies and an indispensable partner,” it said in a statement.

Across the political spectrum in Italy meanwhile, parties were plotting the next move in a high-stakes game with the country's top job as prize.

Renzi, 41, has been asked by the president to stay on for a few days to pass the 2017 budget in a bid to reassure Europe and the markets that the heavily debt-laden country is not the eurozone's next nightmare.

The government has already won a vote of confidence on the budget in the lower house of parliament, but needs the senate's nod.

After that, President Sergio Mattarella will consult with party leaders before naming a new prime minister, though whoever it is will have to have the backing of Renzi's centre-left Democratic Party (PD).

The crisis could see the 2018 elections brought forward by a year and potentially see the populist Five Star movement – which wants a referendum on quitting the euro – seize power.

Italy's mainstream parties on the left and right share a common interest in keeping the Five Stars out, but disagree on how to do it. The issue is complicated by the fact that a recent reform to the electoral law only applies to the lower house of parliament now that the constitutional reform bid has failed.

As a result an election now would create different majorities in the upper and lower house, scuppering any possible government.

“There are many forces in play, pulling in different directions,” Orsina said.

Renzi wants elections as soon as possible to prevent potential competitors from growing stronger, while the Five Stars and the anti-immigrant Northern League party are also keen to vote early and capitalize on the “No” vote momentum, he said.

But parts of Renzi's PD, Silvio Berlusconi's centre-right Forza Italia party and centrists are against a vote for fear of losing, he added.

“What we'll have now is a compromise with an ambiguous government which at the start will present itself as a simple bridge government to take the country to elections in three or four months, but which could strengthen over time,” he said.

The Five Stars said the Italians had “expressed a clear political signal” that they want elections as soon as possible, and founder Beppe Grillo said the party would begin forming a policy platform and a cabinet team next week.

But editorialist Massimo Franco for the Corriere della Sera daily said “no-one is ready to bet on the date of the election,” warning there were “too many unknowns” at play for Italians to be rushed back to the polls.

Renzi is expected to seek the support of the PD to remain party leader, a role that would give him a say on who replaces him.

Whoever is chosen will become the fourth successive head of government to be appointed rather than elected.