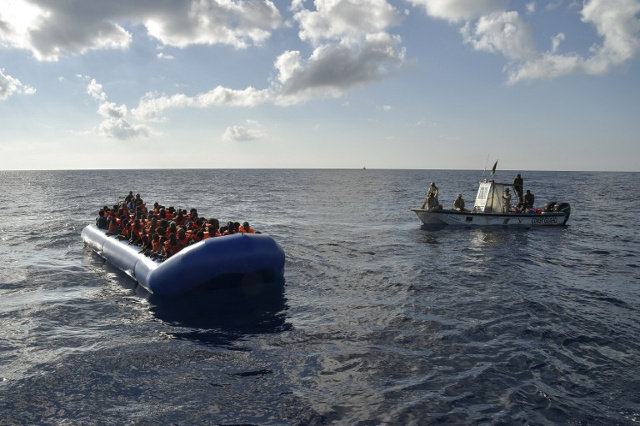 File photo of a previous rescue in the Mediterranean: Andreas Solaro/AFP

On Sunday, the Italian coast guard ship Diciotti discovered 11 bodies on a boat which had run into difficulty, while a commercial vessel intervening at another boat found three dead.

The Aquarius, a relief vessel chartered by the NGOs SOS Méditerranée and Doctors Without Borders (MSF), meanwhile, said efforts to resuscitate two women found on a dinghy had failed.

“Two women died of hypothermia in spite of the colossal efforts of the team. We are heartbroken, again,” MSF said on Twitter.

The reasons for the other deaths were not specified, but burns or fuel inhalation can prove fatal to already weakened migrants setting off from crisis-hit Libya, where abuse and torture is rife.

A turn in the weather over winter usually slows departures, but the pace has remained steady this year while the number of NGO vessels patrolling off Libya has dropped sharply.

All were packed into small wooden boats or inflatable dinghies which often begin to sink after just a few hours at sea.

Among those pulled to safety were a number of Syrian families travelling with young children. Most of the over 173,000 migrants who have arrived this year in Italy have come from West Africa and the Horn of Africa.

According to the UN, at least 4,700 people have died or are missing feared drowned this year while trying to cross the Mediterranean.