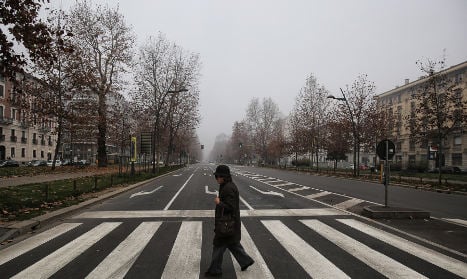 The calm and dry weather of the past few days, including Thursday's bank holiday, may have seemed like good news for those enjoying festive celebrations, but it has allowed pollution to build up in Italy's biggest cities.

In Rome, Sunday will be a semi-car-free day, with restrictions on motor vehicles introduced and police ready to hand out fines to those flouting the ban.

The first 'eco-Sunday' introduced by mayor Virginia Raggi will also see mopeds and motorcycles banned from the streets of the capital. Vehicles judged to be environmentally-friendly, including hybrids and electric cars, are exempt from the ban.

“Surveys have highlighted high pollution levels, and a critical situation which is expected to persist in the coming days,” a note from the city hall said.

Pollutants such as PM10 and nitrogen dioxide have reached high levels in the city, with the latter in particular significantly higher than European standards.

Turin in northern Italy will also introduce limits on cars from next Wednesday, following Tuesday's council meeting. The extent of the ban will depend on the severity of pollution levels over the weekend.

Local environment councillor Stefania Giannuzzi said that residents were encouraged to use alternative means of travel even before the bans are officially put in place.

Milan also recorded high levels of fine particle pollution (PM10) but no block on traffic has yet been put in place, because the recommended limit has not yet been surpassed for seven consecutive days.

Since the beginning of the year, air pollution levels in Milan have exceeded European limits for a total of 52 days. That compares to 62 in Turin, 59 in Frosinone and 53 in Venice.

“The causes of smog are known and there are solutions,” the president of Legambiente, Rossella Muroni, said. “We need a strong political will to put them in place.”

Paris and Lyon in France have also been suffering from the smog in recent days, with Paris making all public transport free to residents. However, this measure was expected to be lifted over the weekend as air pollution levels began to fall.

But motorists aren't the only culprits. Last December, a town in Campania, near Naples, banned pizza-making over fears that the wood-burning ovens were contributing to pollution.