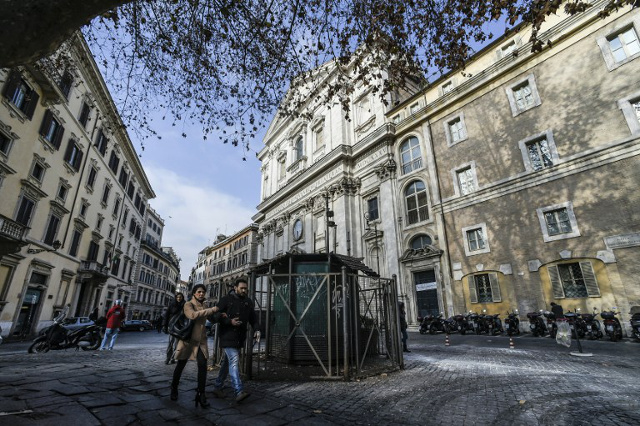 A smog and pollution censor in Rome. Photo: AFP

The situation is most serious in Milan, where safe limits of fine particles have been surpassed more than 60 days this year, and for seven consecutive days so far in December.

The most polluting cars – Euro 0 petrol cars and Euro 0, 1 and 2 diesel cars – have been banned from the streets on weekdays between 7:30 and 7:30pm since mid-October. This ban has now been extended to weekends as well, with an additional block on diesel Euro 3 cars in place between 9am and 5pm.

On Sunday, 15 motorists were fined for flouting the ban after spot checks were carried out.

Milan's city council has taken other measures to fight the smog: bonfires, or any other activity involving burning wood, have also been forbidden.

Meanwhile, property owners have been asked to lower temperatures in homes and offices to 19C as an additional way of fighting the fine particles pollution.

The city's councillor for mobility and environment said the restrictions would likely continue over the coming days, as weather conditions were expected to stay stable.

Sunday was the first 'Eco Day' in Rome, with the most polluting cars banned from the streets.

In Naples, traffic restrictions are in place between 9am-12:30 and 2:30-4:30pm, with the ban in place on Monday, Wednesday and Friday of this week. Turin will introduce its first traffic blocks on Wednesday.

On Monday, consumer rights' organization Coldiretti noted that the lack of green spaces in Italy's big cities may be one factor in the country's high level of air pollution.

It said that cities  green spaces made up just 2.7 percent of urban, according to data from national statistics agency Istat.

“This calls for action at a structural level, since an adult plan is able to absorb 100-250g of fine particles from the air, so one hectare of plants eliminates about 20 kilograms of dust and smog each year,” the organization noted.

Paris and Lyon in France have also been suffering from the smog over the past week, with Paris making all public transport free to residents. However, this measure was lifted over the weekend as air pollution levels began to fall.

But motorists aren't the only culprits. Last December, a town in Campania, near Naples, banned pizza-making over fears that the wood-burning ovens were contributing to pollution.