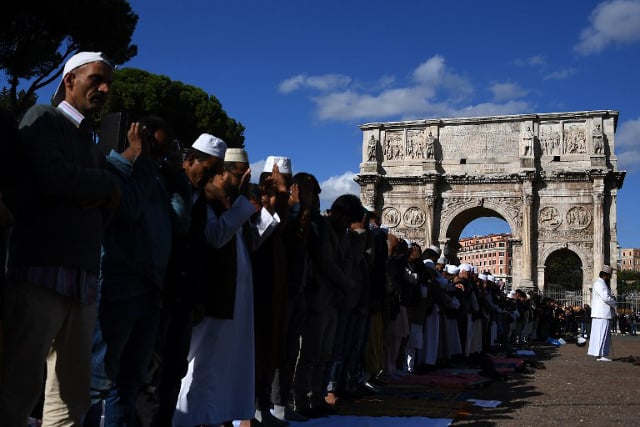 When asked what proportion of the country's population was Muslim, the average guess was 20 percent or one in five – a figure wide of the mark.

In reality, Muslims actually make up just 3.7 percent of the population in Italy. That's a 16.3 percentage point difference, the fourth highest of the 40 countries included in the research.

France, South Africa and the Philippines were the only countries with a higher 'perception gap', but almost all countries overestimated their Muslim population, the survey found.

The figures come from IPSOS MORI Perils of Perception 2016, which also asked respondents what they thought the Muslim proportion of the population would be in 2020.

Again, Italians drastically overestimated the numbers, predicting that almost a third of the country (31 percent) would be Muslim within four years, whereas the 'actual' figure – based on data from the Pew Research Centre – is projected at 4.9 percent.

In this instance, Italy had the third highest gap between the responses and reality, behind only France and South Africa.

Bobby Duffy, Managing Director of Ipsos Public Affairs, said it was a widespread trend that people “overestimated what they worried about”.

“We are often more incorrect on factors that are widely discussed in the media, such as the proportion of our population that are Muslims and wealth inequality,” he said in a statement.

In January of this year, the government announced that a special council, made up of academics and experts in Islamic culture and religion, would be set up to ensure better integration of the Muslim community.

The closure of several unofficial mosques has been met with peaceful protest, with a large group of Muslims attending Friday prayers near Rome's Colosseum to protest about the lack of places of worship.

Overall, Italians performed better than most other countries in Ipsos' Index of Ignorance, which ranked countries in terms of how far from reality their responses were. In compiling this index, only the questions based on reality (and not projections) were taken into account.

Italians placed 33rd out of 40 in the Index of Ignorance, meaning only seven countries provided more accurate responses. The Netherlands were the most accurate in their estimates.

The survey also looked at estimates of the proportion of the population who describe homosexuality, sex before marriage and abortion as “morally unacceptable”. In their responses to the first two questions, Italians were overly pessimistic, estimating that 41 percent of people oppose homosexuality, while the actual figure is 19 percent.

However, when it came to abortion, the average guess was that it was judged immoral by 38 percent of the country, a figure just one point higher than the actual one.