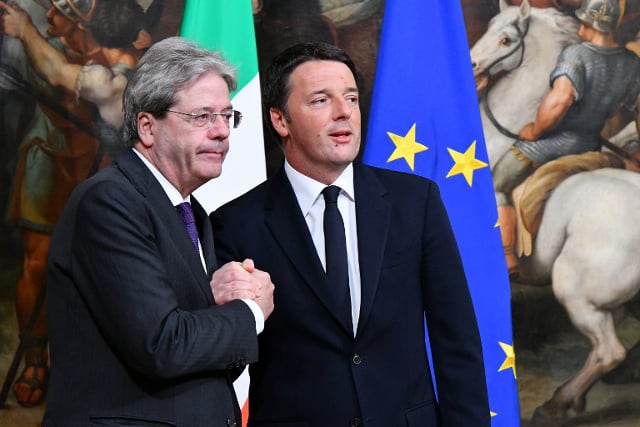 Incoming Prime Minister Paolo Gentiloni has been slammed by the opposition for naming a new line-up that is virtually a carbon copy of the team that served his predecessor Matteo Renzi.

Former foreign minister Gentiloni was nonetheless expected to win a confidence vote in the Senate, having secured the backing of the Chamber of Deputies on Tuesday evening. The Senate vote was due mid-afternoon on Wednesday.

Italy's biggest opposition party, the populist Five Star Movement (M5S), has boycotted the debates, insisting the government has no legitimacy after voters overwhelmingly shot down constitutional reform proposals in a recent referendum, prompting Renzi to quit.

M5S, a broad-based faction led by comedian Beppe Grillo, is betting that a wave of street protests will serve it better as it seeks to displace Renzi's Democratic Party as the country's biggest political force in the countdown to the election.

Polls currently point to them being neck-and-neck, each able to count on the backing of around 30 percent of voters.

With all the opposition parties pounding away at it, the 'photocopy' or 'puppet' government issue has played well on social media with the new premier accused of being a #RenziCloni or heading up a #Genticlone government.

So far, it does not seem to have helped the opposition significantly. But the issue is reportedly causing concern among some Democratic Party officials who fear the longer the Gentiloni administration goes  on, the stronger M5S will get.

Gentiloni said Tuesday his government would continue as long as it could command a majority in parliament, suggesting he would like to continue until the end of the current parliament in February 2018.

But centre-left daily La Repubblica said that would be a “nightmare” scenario for Renzi, who is planning to be the PD's candidate for a return to his old job, and is said to prefer a June election.

Luigi Di Maio, the sharp-suited 30-year-old tipped to be M5S's candidate, claimed that every single day of a Gentiloni administration would be a bonus for his party.

“They are digging their grave with their own hands,” he said.

Renzi meanwhile said he was not short of offers of employment after nearly three years as premier.

But he indicated he would be concentrating on his comeback in between doing the school run and getting stuck in traffic around his home town of Pontassieve in Tuscany.

“I know I have a responsibility to all the people who believe in the PD and I can't just say I'm dropping everything,” Renzi was quoted as saying by La Repubblica.

The 41-year-old ex-premier is widely seen as having ensured grey-suited Gentiloni took over because he is unlikely to emerge as a serious rival for the party leadership.

Gentiloni, 62, whose measured, softly-spoken manner is in sharp contrast to Renzi's more frenetic style, is due to attend a summit of EU leaders on Thursday.

He has said he will use the Brussels meeting to reiterate Italy's demands for more support on dealing with the arrival of tens of thousands of migrants on its southern shores and for greater leeway on the application of budget rules.

The new leader has reshuffled Renzi's cabinet slightly with former interior minister Angelino Alfano taking over as foreign minister and created a new ministry to promote the economic development of the relatively impoverished south of the country.

Otherwise, it is business as usual on domestic matters: to the delight of the opposition.