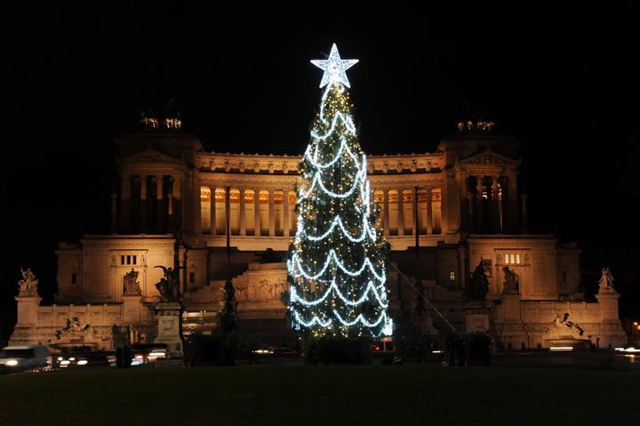 It had been nicknamed the 'albero dell'austerità' (Austerity Tree) and one particularly disgruntled local claimed: “It makes me want to vomit.”

Over a thousand people lambasted the tree on social media, where it was labelled “sad”, “disgraceful” and “disgusting”.

A video circulated on Facebook compared the threadbare fir to its glitzier counterparts in Italy's other cities, from a Pandora-sponsored effort in Milan bearing 50,000 lights to a towering golden specimen in Sorrento. The original tree was criticized for its gappy branches and lacklustre lights. Photo: Comune di Roma

Several also used the bare-branched conifer to attack Raggi's Five Star Movement administration. The second top-rated comment on the city's Facebook post read “It reflects the situation of the whole city. Full of holes and covered in rubbish. Would you want an amazing tree for a city in disrepair?”

But as with every good Christmas tale, there's a happy ending: now Rome's ugly tree has had a festive makeover.

A huge star was added atop the tree on Wednesday evening, along with bigger, brighter lights to decorate its branches.


Mayor Virginia Raggi announced on Wednesday: “Romans want a more beautiful Christmas tree at Piazza Venezia, and they'll get one,” she announced. “I've asked for more decorations and lights to be added, within moderation.”

She had initially responded to the criticism by pointing out that both the tree and the lights had been donated to the city, leaving Rome to pay only €15,000 for the cost of transporting and setting up the tree.

According to Raggi, the resulting savings will be used to improve children's play areas and parks.

Raggi had attempted to bat away criticism, pointing out that both the tree and the lights had been donated to the city, but on Wednesday evening it was decided to spruce up the spruce.