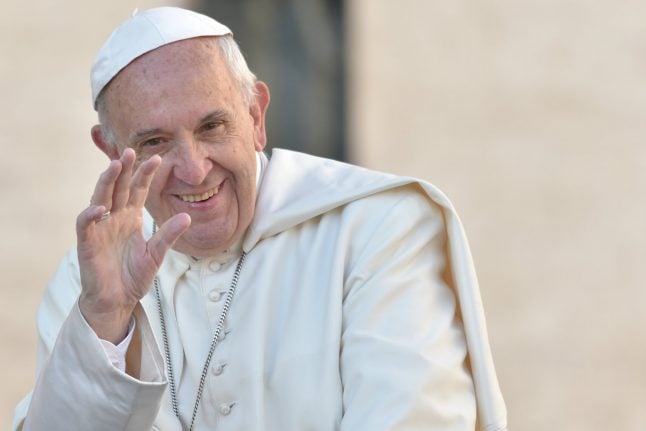 File photo: Andreas Solaro/AFP
“Old age sounds ugly, and causes fear. But old age yearns for wisdom,” he told dozens of cardinals at the mass in a papal chapel in Rome.
“Old age is quiet and religious, but also fruitful. Pray that mine will be that way, quiet and religious, fruitful and also joyous.”
The Argentine pope received messages of congratulations from around the world for his 80th birthday, including at email addresses in eight languages specially set up by the Vatican.
“Italy is grateful to you for your constant closeness,” said one from Italian President Sergio Mattarella.
“The pope's office is covered in drawings by children from the whole world celebrating his birthday,” tweeted Antonio Spadaro, a Jesuit theologian close to the pontiff.
Spadaro released photographs of drawings showing a smiling pope with the world on his head or surrounded by children and party balloons.
But like almost every other day of his papacy, Saturday will be a working day for the holiday-phobic Francis.
Apart from the morning mass with the cardinals, he has meetings with Maltese President Marie-Louise Coleiro, several prelates and members of the Nomadelfia, a secular community that tries to live as the early Christians.
In recent years, the pope has marked his birthday by distributing hundreds of sleeping bags to homeless people in Rome or by sending food to a migrant shelter.
Born into a family of Italian heritage on December 16, 1936, Jorge Bergoglio became the 266th pope when he was elected on March 13, 2013.
This will be the fourth birthday the former bishop of Buenos Aires has celebrated in the modest St Martha's boarding house he has made his home inside the Vatican's walls.
He has shown no sign of slowing down in his drive to reshape the Catholic church to reflect his own vision of compassion and humility.
The first pope from the Americas continues to set a relentless pace as he reaches a milestone at which cardinals are ushered into semi-retirement.
There are signs of fatigue, natural for a man of his age who lost part of a lung in his youth, and the occasional grimace bears witness to the sciatic pain that is a near constant companion.
He has not ruled out following the historic example of his predecessor Benedict XVI, who retired, exhausted, in 2013, although there is no suggestion that could happen soon.