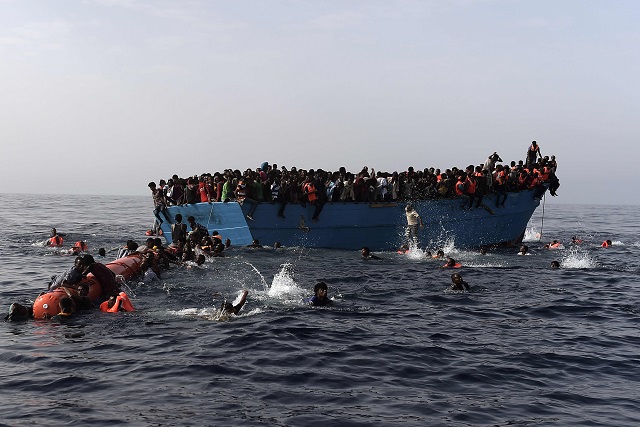 In a small room in a soulless ministry building in the south of Rome, red telephones ring and operatives juggle with maps on giant screens on the walls as they coordinate all rescue operations off Libya.

“As soon as someone calls for help, we become conductors,” directing any nearby vessels – be they coastguard, military, private or commercial – to detour to the rescue zone, spokesman Filippo Marini told AFP.

In the gloom of the operations centre, SOS calls are reduced to little more than coordinates, handled with military precision.

But the cries of desperate migrants, faces numbed by fear and hands outstretched for help as they slip off sinking dinghies, are not far off, with a video of past rescues playing on a loop on a giant screen in the corridor. Spread up and down the 8,000 kilometres (4,980 miles) of Italian coastline, the 11,000 members of the coastguard are charged with ensuring maritime safety, protecting the ecosystem and regulating the fishing industry.

They traditionally survey an area of 500,000 square kilometres (200,000 square miles) off Italy's shores. But an underperforming coastguard in crisis-hit Libya means the Rome Rescue Coordination Centre (MRCC) actually has authority over most of the international waters between both countries.

And the smugglers have upped their game, sending more of their smaller boats – and dinghies rather than wooden vessels – and dispatching lots at the same time. This year saw a 40-percent rise in the number of boats rescued. “The smugglers used to send bigger boats, each with a satellite phone” to call for aid, said Sergio Liardo, the centre's head.

“Now they set off four boats out with one phone.”

Patrolling vessels can easily find the dinghy with the phone but have to look out for the other three, which can deflate and take water quickly.

Drowning is not the only killer here: overcrowding, hypothermia or fuel  burns can also finish off in a few hours people weakened by terrible conditions endured trying to get this far.

As well as the thousands of migrants lost in seconds to the waves -sometimes as the rescue crews look helplessly on – the coastguard's near-daily press releases this year have provided a running tally of corpses discovered aboard dinghies.

The NGO-led rescue vessels patrolling the area have testified to how difficult it can be to spot a dinghy in the immense blue and regularly warn some may be sinking without a trace.

“We cannot rule that out,” Liardo admits.

And while in the past each day of calm seas would see a handful of boats set off, this year saw a series of mass departures.

In Italy, where reception centres are at bursting point, the figures have stirred up a storm, with the anti-establishment Five-Star Movement and anti-immigrant Northern League insisting it is not Rome's job to rescue foreigners off Libya and house them here.

The government says rescue ops at sea will have cost 1.5 billion euros this year, with an extra 2.3 billion euros spent on reception.

“We have a duty not to let these people die. If we ignored it, we would have to answer to the Italian justice system,” Marini said.

“It's also a question of human kindness,” he added.