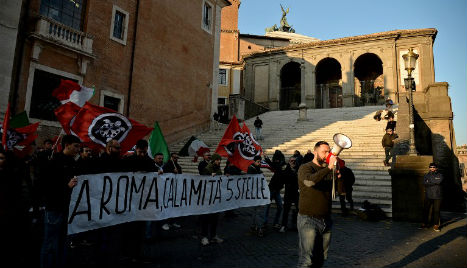 Members of the far-right group Casa Pound hold a protest on December 16. Photo: Filippo Monteverdi/AFP
The officer suffered serious injuries to a hand and an eye, city police chief Alberto Initmi told RaiNews24 television.
Police called in an explosives team after a patrol spotted a suspicious package outside the bookshop, which has ties to a far-right group called Casa Pound.
As the experts approached the package, the blast occurred, said investigators cited by the Italian news agency AGI. The device had been fitted with a timer, they added.
Casa Pound first emerged in Rome in 2003. The movement now has several hundred members, who stage protests against the European Union (EU) and immigration.
Url copied to clipboard!