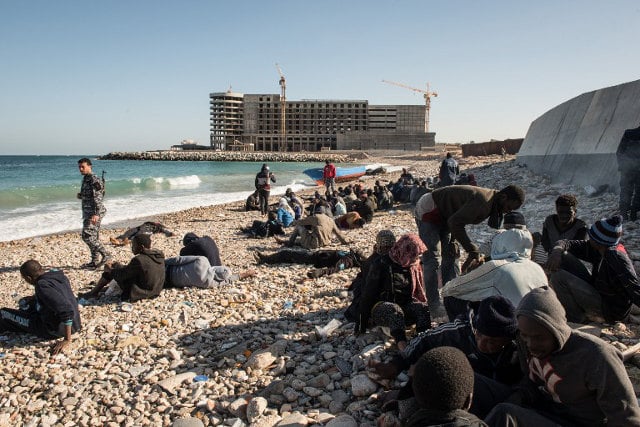 The treacherous and ultimately futile journey by 80 mostly Senegalese migrants had begun in Sabratha in western Libya three days earlier, one survivor recounted.

After setting off, the boat was buffeted by rough seas and eventually ran  aground on a beach in Tripoli some 70 kilometres (40 miles) to the east.

“We thought we had already arrived in Italy,” one of the survivors told AFP.

Witnesses said several people had jumped from the boat to try to reach the beach but were unable to swim and drowned.

Those who made it to the shore alive included two women — one pregnant – and a child, and they were all in shock.

The pregnant woman sat in tears on the beach next to what was believed to be the body of her brother. She was later hospitalized.

The Libyan Red Crescent said it had recovered the bodies of five passengers from the beach on Wednesday and taken 80 people to shelters.

People-smugglers have exploited the chaos in Libya since the 2011 uprising that overthrew dictator Moamer Kadhafi to traffic migrants in boats to Italy 300 kilometres away.

According to the United Nations, more than 5,000 migrants and refugees died last year while trying to cross the Mediterranean.

On Wednesday, after a riot in a northern Italian migrant centre reignited political debate over how to deal with the migration crisis, ministers said they would try to reach an agreement with Libya. Foreign Minister Angelino Alfano said it was one of three 'key countries' whose co-operation was needed to resolve the crisis.